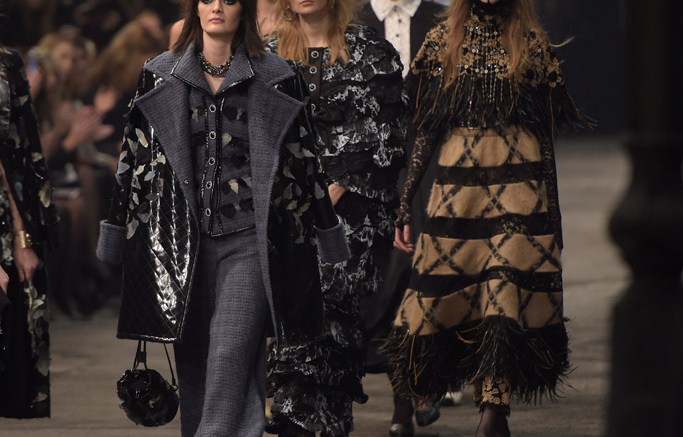 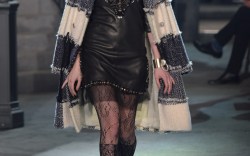 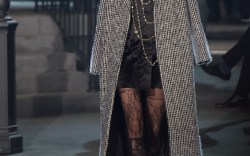 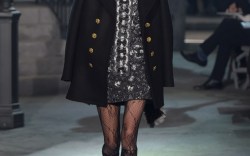 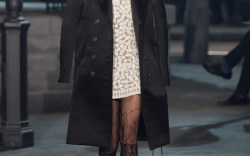 When in Rome, we’ll always have Paris. Leave it to Karl Lagerfeld to combine those familiar phrases with cinematic roots in order to create fashion fireworks for Chanel — and at a tender moment for the French capital, still shrouded in grief and gripped with heightened security following the Nov. 13 terror attacks.

“I didn’t know when we started the idea of Paris in Rome that it would be the best moment to show a perfect, romantic Paris when Paris today in reality is the opposite of a romantic city,” Lagerfeld said during a preview of his latest Métiers d’Art collection. “It’s really unbelievable, no?”

Tuesday night’s show, staged at the famed Cinecittà film studio No. 5, was a tour de force of saucy Gallic chic, paraded in a vast set depicting an idealized Paris neighborhood of yore, all in sooty black and white and complete with cheese shops, wine merchants, bakeries, an oyster bar and, of course, a cinema. The decor was a nod to late French production designer Alexandre Trauner, who famously designed sets for most of Marcel Carné’s films in the Thirties and Forties.

Lagerfeld also premiered “Once and Forever,” an 11-minute movie he directed that features Kristen Stewart as a fiery actress slated to star in a Chanel biopic — if only she could stop bickering with practically everyone on set. It was projected onto a giant screen in the outdoor La Piscina area of the studio, flanked by set elements from “Gangs of New York,” just one of the 3,000 films that have been shot at the sprawling Cinecittà complex. Earlier, guests sipped cocktails amidst the statuary and buildings from the TV show “Rome.”

The almost surreal fashion show, like the film, unfurled an intricate narrative that connected Gabrielle Chanel to the movie business, and to the Eternal City.

A walking encyclopedia about the house founder — and no slouch on old movies — Lagerfeld recounted how Chanel once had an apartment on Via Giulia; strolled around Rome with the likes of artist Jean Cocteau and socialite Francine Weisweiller; struck up a friendship with “The Leopard” director Luchino Visconti; became famous in Italy’s social swirl, and costumed a slew of French actresses for Italian movies in the Fifties and Sixties, including Jeanne Moreau, Delphine Seyrig and Anouk Aimée.

Archival photos of those film stars jockeyed with shots of the new Chanel collection in “The Roman Express,” a mock tabloid newspaper that Lagerfeld produced in lieu of a press kit, even shooting ads for key accessories from the new Paris-Rome collection. These include an acrylic shoulder bag in the shape of a vintage movie camera, and a new shoe silhouette for Chanel — a mule with a snake entwined around a pearl on the heel. The design telegraphed the sexual undertone to the collection, which was loaded with lingerie detailing and lace, some of the latter done up as long, fingerless gloves that Lagerfeld dubbed “arm stockings.”

While intimately familiar with Italian style, having designed the furs and ready-to-wear at Fendi since 1965, and having visited Rome precisely 827 times (he keeps a tally of trips in a notebook), Lagerfeld opted to exalt Paris more than the Eternal City with its ruins and captivating golden light.

“It’s like the French girl comes to Rome, with a few little touches inspired by the cardinals,” he said as two models entered his makeshift studio at the InterContinental hotel wearing tweed Chanel jackets with caped shoulders. “But it’s very Paris. It’s not Rome and alta moda. This has nothing to do with priests.”

(In fact, Lagerfeld said the correct name for the brief cape is a bethe, the French word for a crocheted style that some concierges wore as recently as the Sixties).

A long tweed vest and pants combo also had a slight Italian accent, reminiscent of what Lagerfeld dubbed “palazzo pajamas,” as did a suite of voluminous pants in nubby boucle.

Echoing Lagerfeld’s film, which depicts the young and flirtatious Coco, the collection skewed coquettish, with barely-there slipdresses, one-shoulder tops and black leather minidresses, their racy femininity tamed by mannish coats in more black leather or textured felt. There was a drop of fashion editor Carine Roitfeld in the glossy black pencil skirts, defined waists and peacoats propped on shoulders.

The collection culminated with lace dresses as delicate as negligees and flecked with dark purple ostrich feathers, catapulting Chanel into va-va-voom territory, albeit with the finesse and sophistication of an august French couture name.

Lagerfeld also paid homage to other kinds of Parisians, from gamines in schoolgirl tweeds and Timberland-style boots to more bourgeois types with white collars and cuffs. The knitwear was exceptional, especially gossamer pleated skirts edged in lace and geometric crewnecks topped with elaborate jeweled capelets.

Celebrities in attendance — even actresses who know their way around a film set — were agog at Chanel’s installation, which mingled with decor from the TV show “Rome,” and the venue itself, built in 1937 and the studio used by Federico Fellini.

Stewart, dressed in a sparkly silver jacket and wide-leg leather pants, marveled that Lagerfeld always manages to deliver “what resonates emotionally with people,” in this case the bewitching beauty and charm of Paris, perhaps even more ravishing when drained of color, as it was in Lagerfeld’s set.

The actress is filming “Personal Shopper” in the French capital. “There’s a cinematic culture in Paris that doesn’t exist anywhere else,” she said.

French actress Clotilde Hesme was among guests seated on a café terrace to witness the show, as models emerged from a Metro staircase and strode by on cobblestoned streets patched with asphalt and dotted with curbside puddles.

“I can’t separate the dream from the sad reality,” Hesme said. “He gave us what we needed: The Paris we love.”

“I am so proud of Rome,” said Pierpaolo Piccioli, discussing the spotlight on Italy’s capital thanks to shows such as Chanel’s. The designer was set to travel to Miami on Wednesday for a performance by artist Pietro Ruffo, who created the installation for Valentino’s couture show in Rome last summer.

“He is a genius,” Geraldine Chaplin said of Lagerfeld. “He brought Paris here and in black-and-white.” Chaplin was set to fly to Havana – where Chanel is headed for cruise in May — in her role as president of the Cuban capital’s film festival.

Rooney Mara also enthused about Chanel’s set: “I love the fact that it’s black-and-white.” The actress added that it was “incredibly exciting to be in Cinecittà” — a first for her.

Actress Margareth Madè recalled her “strong emotions” filming at the storied Roman location a few years ago with Sophia Loren. “This is a real movie set that Karl re-created,” she said. Madé will soon appear on screen with Alec Baldwin in the science fiction movie “Andron: The Black Labyrinth,” which was presented last month at the genre’s film festival in the Italian city Trieste.

The latest role for Polish actress Kasia Smutniak, who exchanged greetings with director Ferzan Ozpetek, was “extremely demanding,” as she played a veteran from the war in Afghanistan. Tackling a lighter subject, Smutniak confessed her passion for clothes and runway shows, with an inclination for the latter. “Shows are always like a wonderful set, there are always references to the movies, and ever more so at Chanel.”

Among other guests were Princess Caroline of Monaco and her daughter Alexandra of Hanover, Carla Fendi and Silvia Venturini Fendi, Jérémie Elkaïm, Zhou Xun and Anna Mouglalis, who noted she has two black-and-white movies under her belt.

While Lagerfeld chose Rome for his latest itinerant fashion show by following his creative instincts, it dovetails with a solid business in Italy for Chanel, which last year christened a four-story flagship here facing the Spanish Steps.

Bruno Pavlovsky, president of Chanel fashion, said Italy is the brand’s second-largest market in Europe after France, with a network of five boutiques being “optimized” to display more ready-to-wear, and a larger Venice location slated to open in 2016.

Roughly half of Chanel’s fashion products are manufactured in Italy, including shoes, leather goods, knitwear and denim. Pavlovsky disclosed that over the summer, Chanel acquired Gensi, a shoe manufacturer two hours outside of Rome with a particular expertise in sneakers, as well as sandals and ballerina flats.

The Métiers d’Art collection, introduced by Lagerfeld in 2002 as a way to exalt the specialty couture ateliers Chanel owns, ignited the pre-collection frenzy and has become one of the brand’s most important deliveries, backed by dedicated advertising campaigns. Stewart has already been cast as the face of the one for Paris-Rome, as reported.

“We have customers that are very interested in this kind of unique product, which gives a lot of content and is made with unique know-how,” Pavlovsky said in an interview. “It offers a powerful story and our customers appreciate it quite a lot.”

The collection is delivered in May to all doors of Chanel, and top U.S. department stores, enjoying a long shelf life.

Pavlovsky noted that while showroom sales start Thursday in Paris for its boutique buyers, Chanel was making contingency plans via digital tools for American buyers who might not be traveling to Paris in the wake the State Department warning alerting U.S. citizens to possible risks of travel due to increased terrorist threats.

Chanel’s spotlight on Rome caps off several years of healthy investments in the Italian city by luxury brands, which are supporting restoration projects and planting large-scale boutiques, including a Valentino flagship, a Maison Margiela boutique, and Polo Ralph Lauren’s first stand-alone store in Italy. A Dsquared2 boutique is slated to open in March in Rome amid growing tourism spending, notably by Chinese and Americans.

According to tourist association Ente Bilaterale Turismo del Lazio (EBTL), 14 million visitors are expected this year, while Global Blue reported that tax-free spending in Rome rose 10 percent in October, with apparel and leather accessories accounting for almost three-quarters of spending.

Pavlosky noted that local clients are also important, accounting for up to 70 percent of ready-to-wear sales, whereas tourists spend more on accessories.

Meanwhile, Lagerfeld’s decision to depict a perfect Paris in Rome is only the latest prescient show theme. His airport set for the spring show in Paris in October coincided with dramatic labor strife at Air France in which union members ripped the clothes off the airline’s CEO. “I think I should have a crystal ball and make my living as a fortune teller,” the designer mused on Monday.