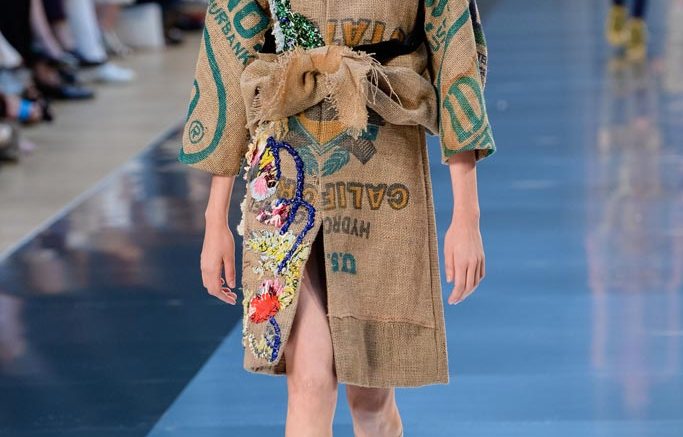 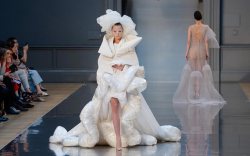 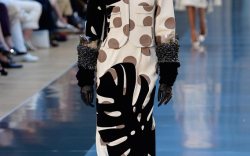 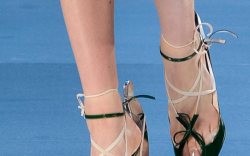 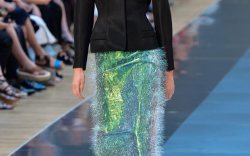 For John Galliano, pumps, boots and sandals – the most signature of women’s shoe styles – are apparently foreign concepts. And thank heavens. Taking their place on the Haute Couture runway this season were a highly unusual mix of oddball heels of the highest order. Jumping off Margiela’s conceptual DNA, the designer took footwear in a distorted direction.

Crisscross pumps (if you can even call them that) were cut so low on the vamp that clear acrylic was needed to keep toes in line. Plexi heels were shaped like butchers knifes for added edge. They were also offered in a low heeled, less dangerous version. Simpler satin styles were also gleefully subverted with too-big ribbed grandpa socks, worn knee-high or pooled at the ankles just so. They were paired with printed rice bag coats, a send-up on that old nutcracker of being well dressed in even a burlap sack.

The backs of these laced-up pairs left open in a haphazard affectation. Elsewhere, t-bar heels appeared to be torn apart in an artfully distressed manner. Then things got really weird. For the finale, models walked the runway in a brocade take that even came adorned with tassels of paste jewels, their uppers effaced with a bizarre stamp motif.

But make no mistake of our word choice: “unusual”, “oddball”, “distorted”, “subverted”, “haphazard” and “bizarre” are indeed high-praise for Galliano’s much-appreciated, most original march.