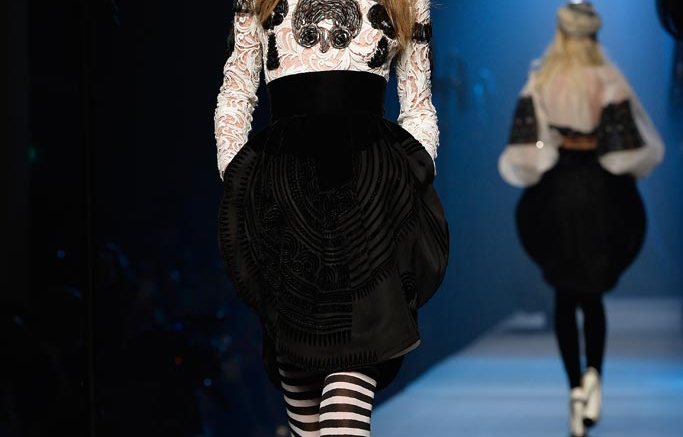 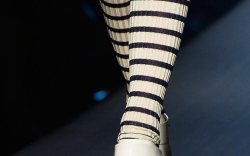 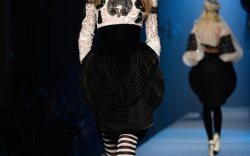 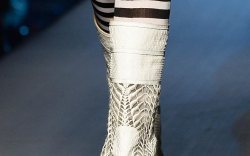 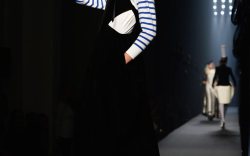 Any show that starts with serving attendees crepes – as Gaultier did today in Paris – is sure to go in a Gallic direction. Gaultier owns the horizontal Breton stripe in the same way Chanel owns the gold-buttoned tweed – two of the most quintessential French fashion statements that never seem to fall out of favor, now do they?

This season, while footwear was certainly outré, it was the hosiery, sock and leg wear looks that stole the show.

Offered in his signature striping, knee-highs were styled over sheer tights. They came in classic navy, black and white colorways and were paired with towering clogs. Models were made taller still with sculptural coifs. The mule-style shoe also came in molten metallic finishes, satins and patents, which were all paired with a dizzying array of more novelty leg wear. A burnout sheer and opaque striped pair had coquette charm, but the black and yellow bumble bee style was gimmicky at best.

Breaking up this increasingly costumey French romp was an assault of Scottish bagpipers who took to the runway to close the collection with a traditional Breton song. Adding to the drama were memorable turns by Naomi Campbell and a quasi-performance piece by Anna Cleveland, daughter of Pat Cleveland. In short, there was a lot going on.

Click through the slideshow below to explore all the looks off the runway.