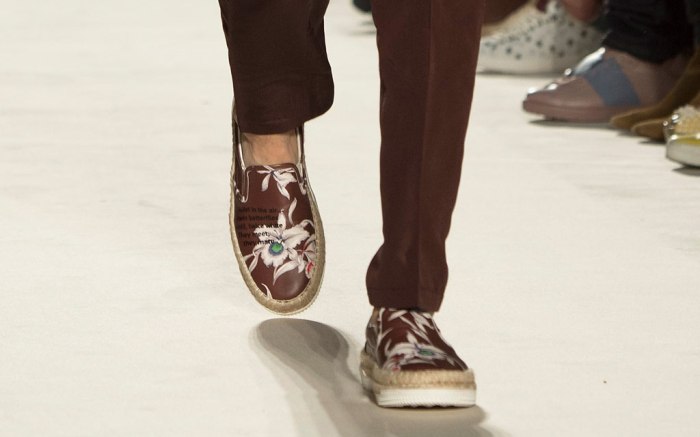 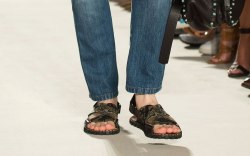 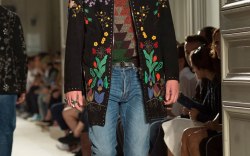 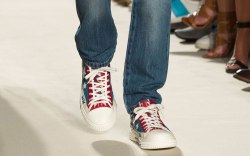 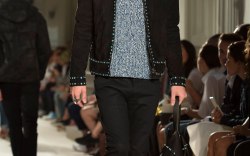 Valentino officially kicked off Paris Fashion Week with its men’s spring ’16 show. Designers Pierpaolo Piccioli and Maria Grazia Chiuri continued their focus on sandals and sneakers, which were a hot buy for menswear retailers last season.

Flatform slip-on sneakers made up most of the collection, which also featured espadrille-style roped soles. The elevated espadrille is already proving to be a strong trend for the season, with Dolce & Gabanna offering a whole collection of the style in Milan. Here, the colorways included solid leathers as well as a pineapple or floral print. Certain styles even had a short poem printed on top of the designs.

Low-top sneakers, on a white or black base, featured beadwork that included stars, dragonflies and butterflies.

Compared with Valentino’s chunky Teva-style sandals last season, this season’s mandals were a tad more experimental. Crisscross silhouettes were finished in a Mexican serapé prints, while sleeker, double-strap sandals were done in the label’s signature camo.

One dress style — something Valentino seems to be shying away from — included a thick lug-sole blucher, offered in a solid black and burgundy leather.

While the footwear wasn’t groundbreaking, the collection featured enough design details to feel fresh and new — something even conservative shoppers can appreciate.

For a closer look at Valentino’s spring ’16 men’s shoes, click through the gallery.

To see more of FN’s men’s coverage, see below: