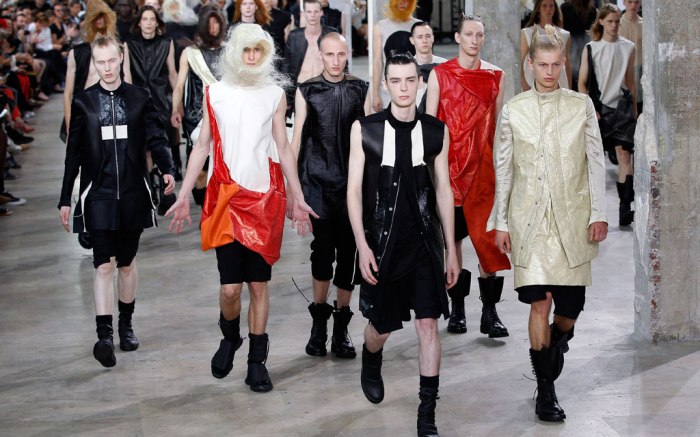 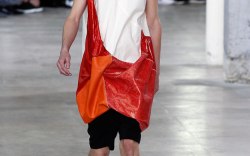 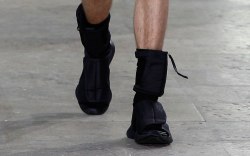 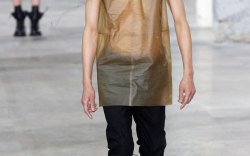 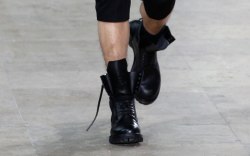 While a Rick Owens show is often some sort of spectacle, there were an unusual amount of things distracting from the spring ’16 shoes in Paris this season.

First, there was the protesting model who went rogue and came out with a “PLEASE KILL ANGELA MERKEL NOT” sign. The attack on the German councilor was, of course, not approved by Owens beforehand.

“He pulled it out and I punched him when he came off stage,” the designer said in a statement. “He’s been my male muse for the past twelve years or something, and I think he just felt comfortable enough to do something in a show and I’m furious.”

Then, there were the cuckoo-crazy hairstyles (which at least is a better reflection of Owens’ twisted sense of humor). Tangled, bird’s-nest hairstyles were arranged in a hood formation, while other models had their hair spiked up in horn formations.

Putting the mini fiascos aside, the designer indeed focused on his signature black leather boots for spring. Black, calf-high boots were straight-cut like wader boots, and featured oversized pull tabs for easy wearability.

Combat boots had extended tongues that peeked out overtop the shoe, while a supple ankle boot was tight-fitted to the leg.

The designer also did not show any of his collaboration Adidas styles this season—perhaps he’s moved on to other things, like finding a new muse.

For a closer look at Rick Owens’ spring ’16 shoes, click through the gallery.