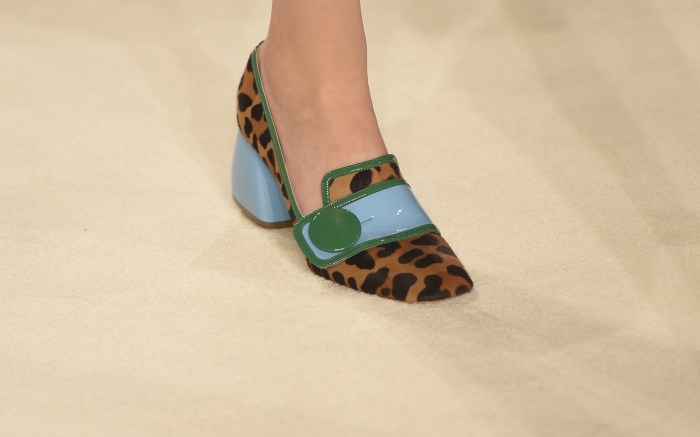 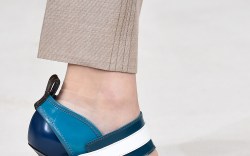 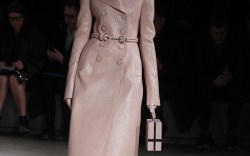 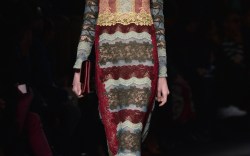 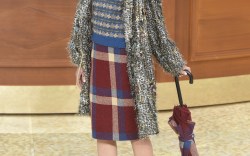 At Miu Miu, eccentric sloping block-heel loafers were tricked out with everything from animal prints to glitter.

Laurence Dacade has pursued experimental footwear designs for Chanel, but this season, he embraced a classic viewpoint with cap-toe slingbacks.

Stella McCartney stuck to a mid-calf cut this season, offered in dark neutrals and a burnout velvet-printed take. Note the newness of the round toe.

Elie Saab updated the tall boot with an open toe in an earthy green suede. It was a welcome departure from the more obvious stilettos and booties.

Junya Watanabe took the decorative-legwear trend in a whole other direction, using the shin as a sketchpad. It added “made-you-look” whimsy to tough studded oxfords.

Alexander Wang went the dainty-pump route with a see-through, capped-toe style for Balenciaga. One wishes he would show the same footwear risk-taking in Paris as he does for his eponymous collection in New York.

And add John Galliano at Margiela to the list of designers hell-bent on making footwear as furry as possible. The death knell for this runway trick better be coming soon.

At Lanvin, it was a footwear feast, with everything from reptile drawstring heeled boots to flat riding styles taking a runway stroll.

Over at Dior, footwear designer Francesco Russo reworked the couture collection’s fetishistic boots in abstract prints and with ombre-tinted lucite heels. The combination would spell Sex Shop were it not for the sophisticated chisel toe and ladylike apparel shapes.

Maiyet also saw the merit of a substantial black boot, grounding silk separates with kiltie styles, shown in both cropped and tall versions and featuring gold hardware along the back.

Balmain showed many floor-sweeping, footwear-obscuring looks this season, making a flash of orchid suede pumps all the more welcome.

Manish Arora couldn’t have timed his eccentric neon-laced winter boots for a better moment: During the presentation, North America’s Eastern Seaboard was pounded by a snowstorm.

Barbara Bui is known for her sleek boots, which this season came pointed, flat and pull-on for added speed.

Roland Mouret paired all of his looks with leather ankle boots featuring toe-to-ankle gold zips, quite like the ones that line the back of his whittled dresses.

What’s the ultimate in minimalist footwear? Bare feet — as seen at Jacquemus.

Dsquared2 showed a top-to-toe ode to Canada for the brand’s 20th anniversary. Stilettos featured beading, fur touches and tassels inspired by the traditional mukluks and moccasins of the First Nations people. They were paired with outdoorsy socks, a playful send-up of lumberjack sartorialism.

MSGM experimented with stretch materials in a multitude of brights for over-the-knee boots with graphic heel- and toe-capping.

Fur slide sandals had quirk to spare at Antonio Marras.

Gold foil low boots with buckles at the toe were a flashy finishing touch at Bottega Veneta. It was a refreshing departure from the label’s usually sedate footwear statements.

Speaking of sedate, limiting leopard print to calf-hair boots was a wise move at Roberto Cavalli.

Marco de Vincenzo and Bluemarine both showed plush takes on the two-piece sandal, while Sportmax added bounce to wallaby-style wedges with a crepe sole.

Blugirl went in a slightly more grown-up direction for fall, pairing menswear tailoring and ’40s dustbowl frocks with tri-tone brogues. They were shown as a traditional flat or with a thick stacked heel.

In a collection inspired by Marilyn Monroe, Max Mara channeled the screen siren’s “men don’t make passes at girls who wear glasses” (and brogues, in this case) persona.

Milan Fashion Week got off to an uncharacteristically buzzy start at Gucci with designer Alessandro Michele’s womenswear debut. While long-hair wooly mammoth loafers might have stolen the show (and blown up Instagram,) there was a trimmed-down version of the horsebit classic, sprouting a comparatively tame burst of fur.

Fausto Puglisi likes to err on the side of loud — from wide-leg over-the-knee boots in zebra to his cranked-volume EDM show soundtrack.

A more soft-spoken take was seen at Alberta Ferretti, whose tall velvet boots had czarina refinement with suede patchwork and signature intricate embroidery.

Stella Jean showed sandals and slip-ons for fall ’15, styles typically reserved for spring, yet made it year-round with luxe sock styling.

What could be more British than Wellington boots to combat stormy weather? Nothing, according to Hunter, which continues to update the staple style, this season with gaiters and wedge heels or Chelsea shapes.

Another shapeshifter, Nicholas Kirkwood, mashed up a loafer,  a suede sockette and a bootie to brilliant effect for Roksanda Ilincic.

Another notable collaboration was from Rupert Sanderson, who lifted designer Antonio Berardi’s vibrant prints, applying them to pointed runway bootines.

Preen by Thornton Bregazzi’s color-blocked Victorian-style buckled harness boots had a foot in the past and the present.

London Fashion Week kicked off with straight-cut wader boots at Gareth Pugh. In keeping with the theme, J.W. Anderson showed kinky boots in red and yellow leathers, completed with side metallic spheres.

Meanwhile, Apu Jan broke from the pack with flatform lace-up sneakers that were water-printed.

New York Fashion Week has ushered in a bevy of new fall ’15 shoes and a number of newsy footwear highlights.

Proenza Schouler, Calvin Klein and Marc Jacobs ended the season on a high note with showstopping footwear statements that had to be seen to be believed.

At Oscar de la Renta, house footwear designer Daniel Lawler worked with new creative director Peter Copping on his first outing for the label. Pointed-toe mules and pumps (some with lace bows sprouting from the heel) got things off to a particularly poised start.

Tory Burch had a seventies swagger by way of Laurel Canyon with tall boots, plus hippyish socks and sandals duets. At J. Crew, leopard print and glitter-dusted heels had considerable verve.

To see the top shoes of the season, click through the gallery.