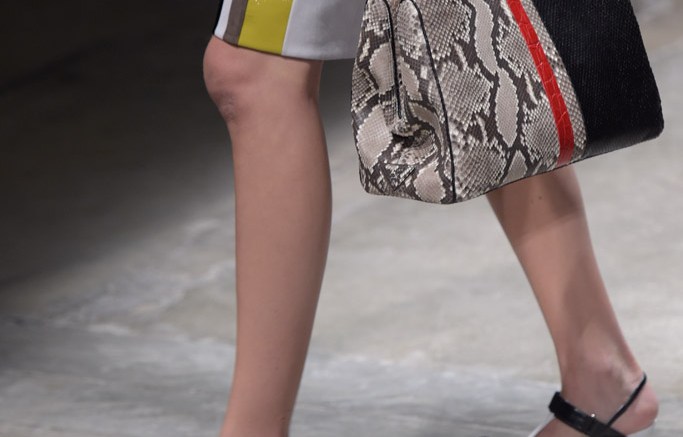 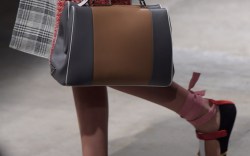 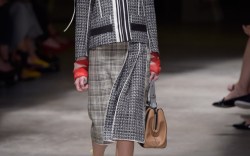 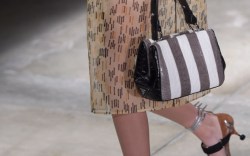 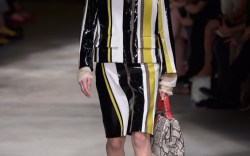 Long before it became the norm for designers to encapsulate their whole collection’s ethos, idioms and essence in shoe form, Miuccia Prada was doing just that. The footwear she sends down the runway are not mere walking devices or implements to create a certain silhouette, be it spindly, stalky or somewhere in between. Instead, she translates the mood any given season through unique footprints.

Today’s show put forth a quieter Prada lady than in previous seasons, with the apparel’s retro wallpaper prints in steady neutrals and filmy layers. The shoes, and there were tons of them, were each a little different, a little special, a little extraordinary. Dainty, oddball details prevailed, with silver orbs placed at the throat of pointed flats and heels, for example. A spectator toe and T-bar strapping had retro elegance, but the prettiness was cut with triple-strapped ankles evoking a terribly chic solution to a common sprain.

The strapping interplay continued on round-toe pumps, with a small stopper adding punctuation to the tips of skinny stiletto heels. There were also tall metallic Jetsons boots, some striped and all flat. After some time championing clompy clogs, chunky heels and platforms, Prada appears to be ushering in a more fine-tuned magpie for spring. Better get ready.

For more of FN’s Milan Fashion Week coverage, see below: