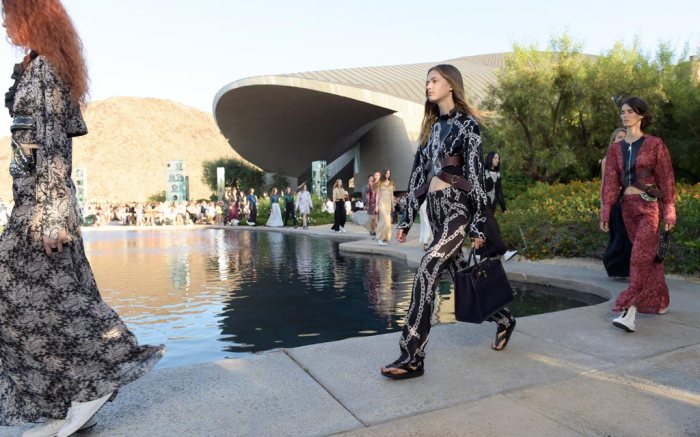 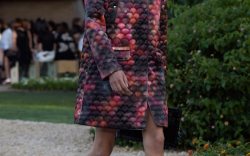 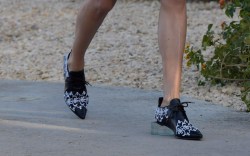 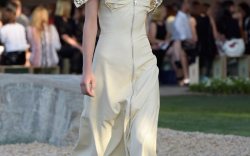 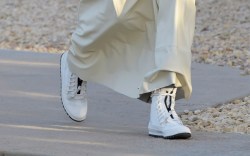 A normal venue just wouldn’t cut it for Nicolas Ghesquiére’s resort ’16 show for Louis Vuitton. After all, the resort collections are geared toward a very specific affluent clientele—how could a simple runway inspire dreams of new yacht attire?

The presentation was instead held at the Bob and Dolores Hope Estate in Palm Springs, a sprawling 23,000-square-foot house where models roamed about languidly before walking for guests on the outdoor grounds. In contrast to its luxe surroundings, though, the footwear was refreshingly un-posh.

While the ready-to-wear presented 1950s twist on floral patterns and maxi dresses—juxtaposed with bondage-style leather harnesses—the footwear offering for the brand was decidedly sensible, with sweeter clothing pitted against rugged desert boots and flip flops (Chanel also took on the sandal back at its fall ’15 couture show).

Patent leather flipflops were also a recurring style in the show, which had a sort of tubular treatment that was also seen on Louis Vuitton’s fall ’15 shoes. These types of sculptural accessories details have long been Ghesquiére’s forte, especially from his days at the helm of Balenciaga.

For more shoe close-ups from the show, click through the gallery.