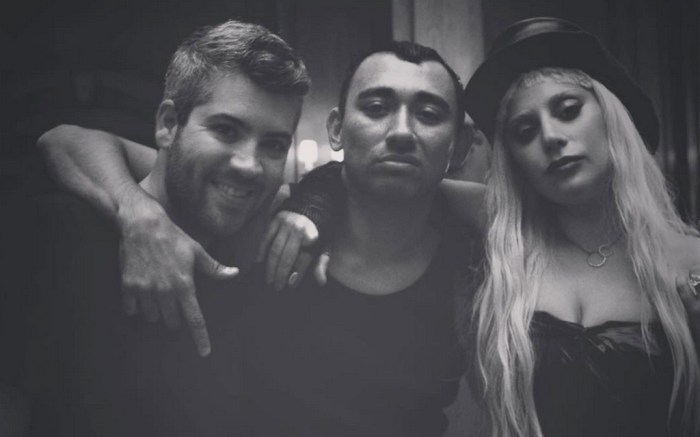 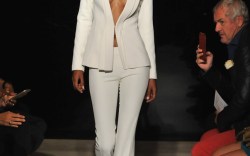 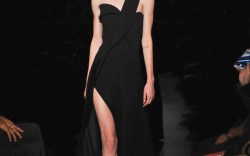 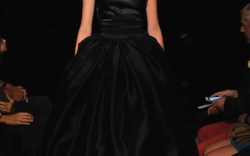 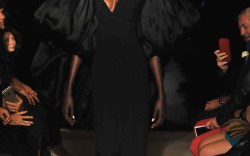 Usually, Lady Gaga has no problem being the center of attention. The singer loves to step out in wild, unexpected outfits on the red carpet, the stage and for casual outings. But on Monday night, Gaga let someone else take the spotlight — her stylist, Brandon Maxwell. Back in 2010, Maxwell assisted Gaga’s stylist, Nicola Formichetti, in creating her infamous meat dress that she wore to the 2010 MTV Video Music Awards.

Maxwell made his design debut on Monday night during spring ’16 New York Fashion Week with an eponymous collection of eveningwear. He showed sharp suits with plunging necklines, sweeping ball gowns and more, all in a grayish cream, black and dusty lavender palette. He kept the footwear simple with classic black pointy-toe pumps and strappy sandals.

The offerings were quite wearable compared with Lady Gaga’s extreme style. It would not be surprising if the collection soon ended up on the red carpet on both Hollywood’s young talent and seasoned leading ladies. The show was held at Mr. Chow restaurant and brought in guests such as Formichetti, who’s now creative director at Diesel, and Alexander Wang, whose show last weekend marked his label’s 10th anniversary.

Lady Gaga played assistant to Maxwell as he prepped for the show and documented much of the days and hours leading up to the presentation on Instagram. The show was also streamed live on Periscope.

Finishing touches for the show! #brandonmaxwell

Gaga often supports designers she loves. She remains a loyal wearer of Alexander McQueen, and earlier this summer, her fiancé, Taylor Kinney, purchased all three pairs of McQueen Armadillo boots that were up for auction at Christie’s, for a combined $295,000.