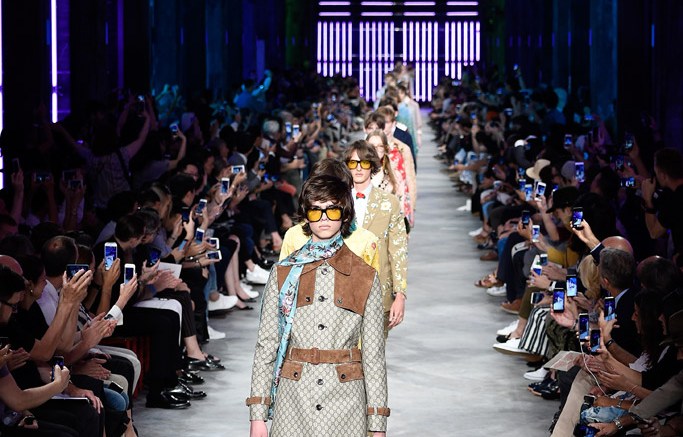 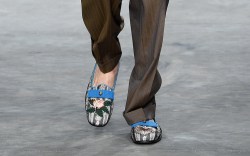 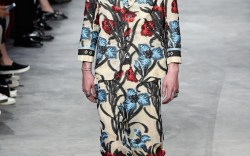 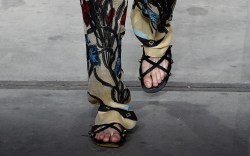 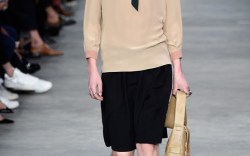 Alessandro Michele is continuing his Gucci revival for spring ’16. The brand’s creative director offered a bold footwear message in Milan this season, presenting strappy ballet flats and glitter-covered sneakers for him.

Gone are the days of Gucci’s over-reliance on the classic horesbit loafer, which made an appearance this season but was not a focal point. Instead, Michele continued his resolute experimentation that last season resulted in shaggy, fur-covered loafers.

The new Gucci sneaker, done in a sporty metallic-dusted fabric, featured hiker laces that were tied up and around the ankle. The same strappy look was seen in men’s ballet flats, which were done in an orange patent and a floral-print canvas. Will men soon be strolling around the streets in glitter and the classic ballerina? Unlikely, but Michele’s ambitious vision for newness is appreciated.

Sandals also made up a strong part of the collection. One style featured spiky studs along the straps — a decidedly more trendy look for the brand, which has typically aimed for a classic, high-luxury customer. The brand’s loafers were done in woven and embroidered finishes as well.

Though Michele’s Gucci is a more divisive and polarizing take on menswear, it’s also a more thought-inducing one. That alone puts Gucci ahead of the game.