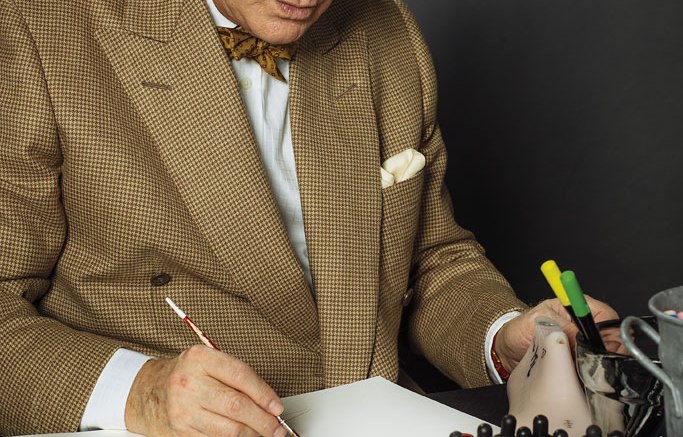 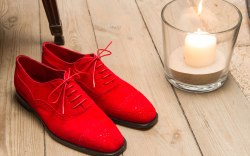 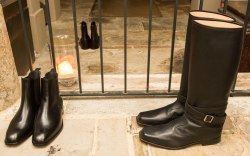 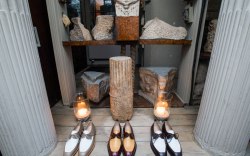 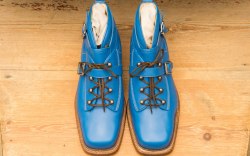 Like the shoe designer himself, the presentation was truly original. It was held in one of Blahnik’s favorite buildings in the British capital: Sir John Soane’s Museum, the elegant, quirky former home of the neoclassical architect. The candlelit space, sprinkled with historic artifacts, provided a fitting backdrop for Blahnik’s diverse, unexpected collection. The line showcased the controversial square toe and included lace-up oxfords, suede sandals, bowed loafers and alpine boots.

“I love my new square last. Maybe I’m going against the trend, but I’ve always done that. Maybe the shoes won’t be commercial, but I couldn’t care less. I’m going to do what I’m going to do. We have the best people in Italy making them. They’re beautiful — just marvelous,” Blahnik proclaimed, his voice rising with every syllable.

Unabashedly enthusiastic, the designer continues to obsess over each detail. “Every shoe has to be perfect, and I’m very stern about the way I want things to be. I want to fight for good quality all the time. That’s why I am so happy about the men’s shoes. They’re the best you can get. I can guarantee that,” he said with conviction.

At 72, Blahnik still designs every one of his shoes himself. He has never  employed an assistant and doesn’t have a team — extremely rare today.

“At most companies, there are so many levels and stages to the process,” added Kristina Blahnik, the designer’s niece and managing director of Manolo Blahnik International. “We don’t have that. There’s no design by committee. If Manolo were hindered by rules, it would paralyze him.”

As he’s gotten older, the designer said he’s realized how lucky he is to be completely independent in an era when many fashion brands are controlled by conglomerates. “I couldn’t live without my total freedom. It’s the only luxury I have. I choose what I want to do, and this is the one thing I’m really happy about. I never had the temptation to sell out because I don’t care about money very much,” he said.

That singular vision is exactly what appeals to the luxury retailers who have helped build Blahnik into a world-famous label. “Manolo lives by a motto that many designers are afraid to adopt: If you do not like what I am making, then don’t buy my product,” said Marigay McKee, president of Saks Fifth Avenue. “In an industry that’s dominated by [trends], Manolo’s unwavering faith in himself and his loyal customers is remarkable and, quite frankly, unheard of in this day and age.”

Saks is teaming up with the designer and his U.S. business partner, George Malkemus, to open a shop-in-shop at the retailer’s New York flagship later this year, a move that will dramatically expand Blahnik’s Big Apple presence.

McKee also helped lure the designer to London department-store mecca Harrods during her stint there. In the three years since his label’s Harrods debut, Blahnik has become one of the retailer’s largest brands. “It’s such a breath of fresh air to work with a company that is 100 percent about creativity,” said Neil Clifford, CEO of Kurt Geiger, Blahnik’s partner at Harrods. “When we meet Manolo and Kristina, [we discuss] the product, the image, the design. It’s not about how much we’re going to buy, what the margin is, what repeat business there is. There are never difficult conversations involving numbers.”

Last fall, when the department store unveiled its buzzed-about Shoe Heaven space, Blahnik received prime real estate. His tucked-away shop is already a favorite among Shoe Heaven’s well-heeled customers, who visit from all over the world. (Blahnik said he was amazed by how many Chinese shoppers came out to meet him at a recent store appearance.)

“Harrods is doing an incredible business, and I’m quite happy because they’re selling the things I like,” he said. “It’s not about pumps and more pumps and the Hangisi pump and blah blah blah,” laughed the designer, who wishes more consumers would gravitate toward his newest styles instead of buying tried-and-true classics over and over again.

Blahnik’s penchant for novelty is one reason the designer decided to expand his men’s offering.  “I had always done men’s shoes, but just a few, for myself and my friends. All the buyers were telling me we needed them, so I said, ‘Why not?’ Harrods already had a few styles, and they all sold out,” he added.

The fashon veteran has certainly taken notice of the rapidly evolving men’s fashion market. But the designer — who is always elegantly dressed in a suit from Savile Row tailor Anderson & Sheppard, along with his signature bow tie — bemoans many of the trends endorsed by today’s young men (and women). “I’m not mad about the looks. Sometimes you see these men in London with beautiful suits, but then they have the buttons on their shirts open. It’s horrible,” he said. “I went out the other night, and people were wearing jeans — to a white-tie event.”

Another fashion statement the designer loathes: tattoos. “In my time, criminals and bad people had tattoos,” Blahnik explained.

On the other hand, the designer — who draws inspiration from “memorable faces” — does make one notable exception. “The only person I love with a tattoo is Rihanna. I was sitting at a table with her [at the British Fashion Awards] and was so impressed. She looks like Grace Kelly. She’s just so beautiful, so polite — she’s not the person you see in interviews.”

He might be even more enthralled with Jessica Lange and her work in “American Horror Story.” “She’s one of the monumental actresses in America,” he said. “I don’t think there’s another woman who is so good at playing evil.”

It’s no secret that Blahnik, an avid reader and film buff who has encyclopedic knowledge of old Hollywood flicks, often stays up most of the night tucking into a favorite book or film.

While he misses the feeling of walking into the now-closed HMV flagship in London to buy DVDs, he’s learned to embrace Netflix and YouTube. “I’m getting so much better on my iPad. The only thing I don’t like is email. I feel obliged to answer people back,” he said.

Blahnik has also been using his iPad to conduct research for his forthcoming book, tentatively titled “Fleeting Gestures and Obsessions,” set to be released this fall. The tome features the people who have inspired him most during his 40-year career, from author Gore Vidal to film director Pedro Almodóvar to “all the women I adore in my life.”

“It’s been an incredible exercise in discipline,” Blahnik admitted. “Every day, there’s something new that comes up, and I’ve been waiting on some of the transcripts and photos for weeks. But it’s been a wonderful experience. I’m ready for another one, but not now.”

The prolific designer also is hard at work on a film about his life and career, scheduled to be released by mid-2016. Then, he’ll turn his attention to a new exhibit — a retrospective that will be shown at several museums across the world.

Beyond his personal passion projects, Blahnik is forging ahead with another big move this spring: the relocation of his headquarters from modest digs in London’s Chelsea to a larger Georgian townhouse in Marylebone, “where everyone has room to be comfortable.”

“I keep going, going, going — it’s adrenaline, I suppose,” Blahnik said. “It’s a miracle I can even sleep, and I don’t sleep very well. Last night, I was physically exhausted, so I started to read Henry James to get away from everything. I’m so old fashioned. But it’s so twisted, and I love it!”

His go-to books provide a temporary escape from reality, but Blahnik says he is getting more anxious about global unrest — “the new disorder,” as he calls it. “It’s not a fantastic time, but even if you’re desperate, seeing all of these horrific things, you have to create,” he said. “I have hope for the future, even if other people don’t.”
While he can’t predict what’s ahead, Blahnik is sure of one thing: He has no desire to slow down. “I can’t just sit back [and relax]. It’s not my life. It’s not who I am.”