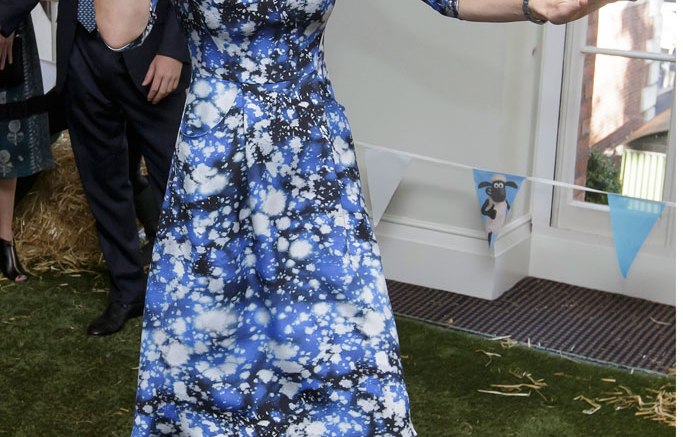 Kate Middleton stepped out on Monday for a BAFTA charity screening wearing the Jimmy Choo Gilbert pump and a blue-and-white print dress by designer Tabitha Webb.

The Duchess of Cambridge, who has worn Jimmy Choo on several other occasions, has been rotating her shoe lineup in the past week. She donned Gianvito Rossi pumps (with a lace Dolce & Gabbana frock) for an outing to Lancaster House with Chinese President Xi and his wife, Madam Peng Liyuan. And on Friday, she wore a favoirte pair of Aquatalia boots for engagements in Dundee, Scotland.

Prince William and Prince Harry were also on hand at the event. The trio hosted children from the charities they support for the premiere of the new film, “Shaun the Sheep: The Farmer’s Llamas.”

Besides the Choo connection, there was another big shoe moment during the morning. Kate, William and Harry tried their luck at Wellie throwing — actually aiming a Wellington boot at a scarecrow and other objects. (William did better than his wife and brother.)

Tonight, Kate and William will attend the world premiere of the James Bond movie “Spectre” at Royal Albert Hall. There, they will meet Daniel Craig and Naomie Harris, as well as the film’s other stars.

Check out a series of Kate’s shoe moments in the gallery.