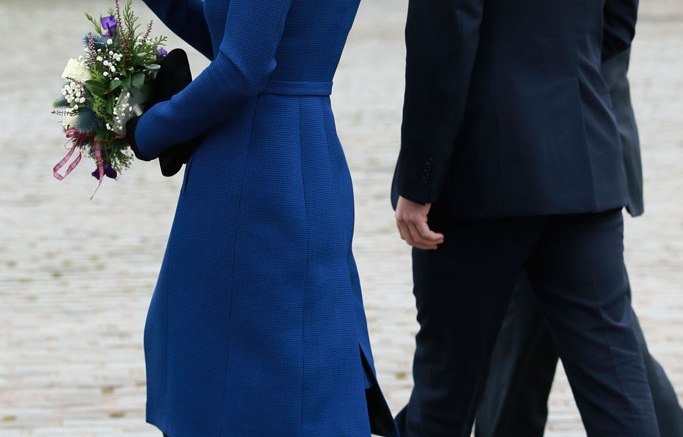 It’s been a big week for the royal family. Kate Middleton and Prince William stepped out in Dundee, Scotland, on Friday for a series of engagements.

The Duchess of Cambridge wore a custom royal blue topper by Scottish designer Christopher Kane — a fitting choice for the locale — paired with a black turtleneck, opaque tights and suede Aquatalia boots.

Middleton is clearly a fan of the brand and its wearable looks. She has donned this same pair of boots many times over the past few years. She was first spotted in them while visiting a homeless shelter in 2011, and later wore them during a trip to her former prep school, St. Andrew’s, in November 2012. She chose them again for a Christmas Day church service in 2013 and for another outing in early 2014.

The Duchess has taken part in several major events this week. She wore a sparkling red gown and a glittering tiara and earrings for Queen Elizabeth’s state dinner for President Xi Jinping of China on Tuesday evening.  The next day, she chose a Dolce & Gabbana lace dress and matching suede pumps for a visit to Lancaster House.

Aquatalia has had an exciting week, too. The brand announced that shoe-industry veteran Edmundo Castillo joined the company last month. Over the past 26 years, Castillo lent his talents to Donna Karan, Ralph Lauren and Sergio Rossi before launching his eponymous label.

For more of Kate Middleton’s standout shoe looks, click through the gallery.