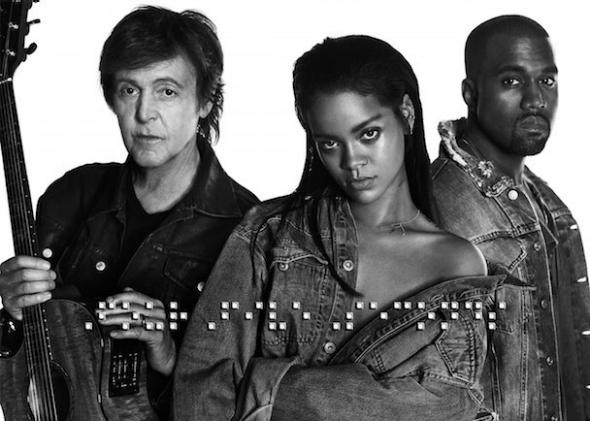 The wait is over. After two years, Rihanna has finally released new music — and the song features Kanye West and Sir Paul McCartney.

The new single, “FourFiveSeconds,” will appear on both Rihanna and West’s upcoming albums, as this collaboration is an extension of West’s and McCartney’s previous single, “Only One.”

Ty Dolla $ign joins West and Rihanna on vocals in “FourFiveSeconds,” while McCartney is featured on keyboards once again. The stripped-down, guitar-driven acoustic track really shows off Riri’s vocal range and may be what we can expect from her eighth studio album.

This latest release may have come as a surprise to fans, but West previewed the track straight from his laptop last Wednesday during a surprise appearance at the iHeartMedia Music Summit.

“Now I’m FourFiveSeconds from wildin’/And we got three more days ’til Friday/I’m just try’na make it back home by Monday, morning’/I swear I wish somebody would tell me/Ooh that’s all I want,” sings Rihanna.

Even though the Barbadian superstar has been laying low music-wise, she’s still making fashion headlines. Just last week, she won a multimillion-dollar legal battle against U.K. High Street store Topshop over a T-shirt with her image on it. And she attended the Daily Front Row Fashion Los Angeles Awards wearing a sequined coat with fur trim, paired with gold-accented Christian Louboutins. Not to mention, she is now the creative director for athletic brand Puma.

The mega-star still gets excited about the release of her new music — captured in the Instagram video below.