Kate Middleton Returns to The Goring for Hotel’s 105th Birthday 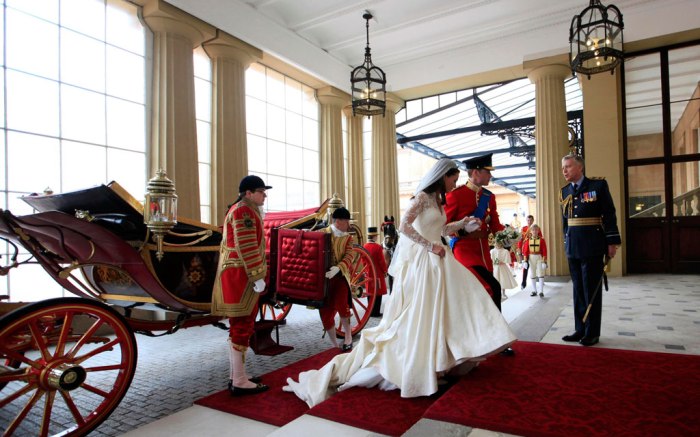 It was a royal celebration today at The Goring in London. Kate Middleton, who stayed at the elegant hotel the night before her 2011 wedding to Prince William, was back to celebrate its 105th birthday.

We were on hand for the big day, which marked the reopening of The Goring — located near Buckingham Palace — after an extensive renovation.

The Duchess of Cambridge, who is now seven months pregnant, arrived for lunch in a floral Erdem dress and navy suede pumps. (The Palace does not release information about Middleton’s shoes, although some British press reports suggested she was wearing Alexander McQueen for the occasion.)

Middleton was greeted by The Coldstream Guards band, who quickly repositioned themselves after the Duchess decided to enter the hotel via the side entrance instead of the front door. A few hours later, she exited through the newly refreshed lobby as dozens of photographers and fans stood outside to get a glimpse.

“This lobby has never been so quiet,” quipped one member of The Goring staff, just after Middleton left the hotel, a favorite of the royal family.

Meanwhile, Middleton’s other half, Prince William, continued his royal duties in China after spending several days in Japan.