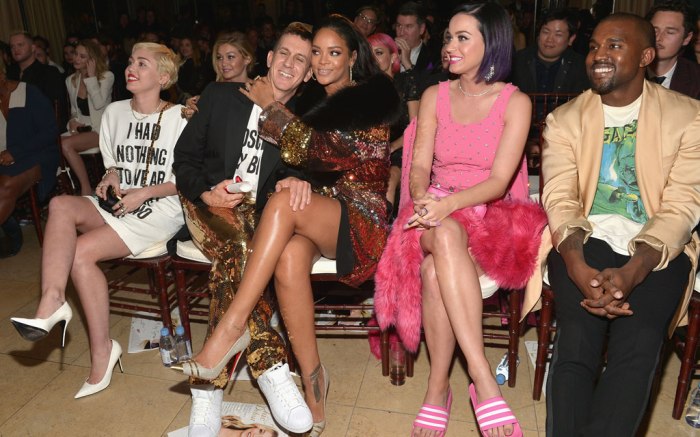 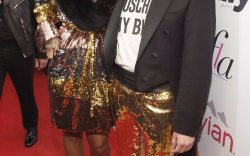 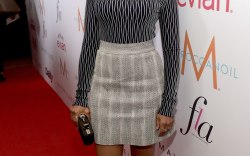 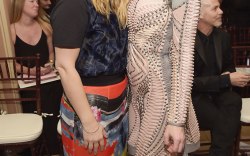 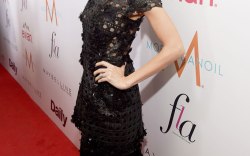 At an event full of celebrities and fashion greats, Katy Perry stole the show. For the first-ever Fashion Los Angeles Awards, hosted by The Daily Front Row, the pop star skipped stylish pumps and walked in wearing pink Adidas slides.

Perhaps her footwear choice was meant to coordinate with her pink-and-purple outfit or to honor the irreverent aesthetic of pal Jeremy Scott, who was receiving the Womenswear Designer of the Year Award. Another possibility is that Perry has been working hard to prepare for her Super Bowl half-time performance on Feb. 1 and needed to give her feet a break.

Wore my slides to a FASHUN party tonight because @ITSJEREMYSCOTT  pic.twitter.com/xAbP8q5KZn

For Perry’s peers at the event, it was all high fashion, however. There were a lot of high-wattage personalities in attendance. Miley Cyrus presented Scott’s award wearing a Moschino T-shirt dress to match the designer’s T-shirt. Rihanna also coordinated with Scott’s flashy pants by wearing a metallic dress. The singers, along with Kerry Washington, Dylan Penn, Nicole Richie and Dita Von Teese, were all in Christian Louboutin, who received the Shoe Designer of the Year Award at the event.

Kanye West, Minka Kelly, Ciara, Drew Barrymore, Armie Hammer, Jessica White, Gigi Hadid (who won Model of the Year) and her boyfriend, Cody Simpson, were also on hand for the show, which took place at the Sunset Tower Hotel.

Before presenting Milk Studios founder Mazdack Rassi with an award for Fashion Innovator of the Year, West made one of his grand proclamations about fashion. https://www.eonline.com/news/617593/kanye-west-not-smiling-makes-me-smile-plus-why-he-believes-fashion-is-god-s-work

“In my opinion, God is the No. 1 creator, and any time we create, we’re an extension of doing his work on Earth. That’s why we’re here. What can we do for humanity? And you know, in a way, fashion is what defines the time…everyone is a fashion insider. It’s illegal to be naked.”