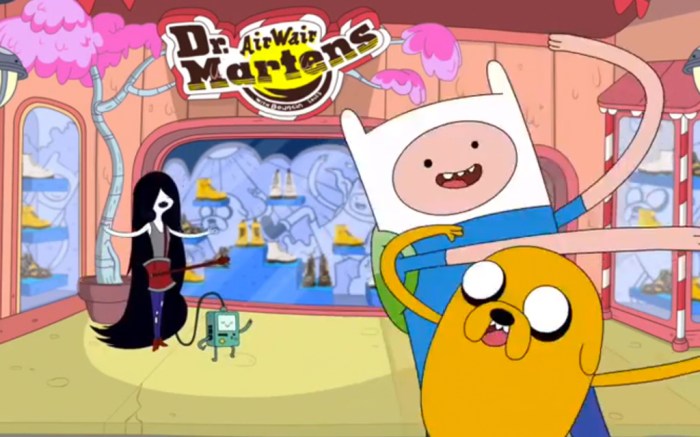 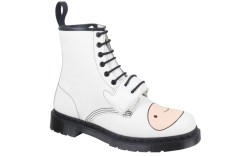 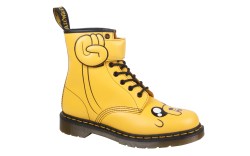 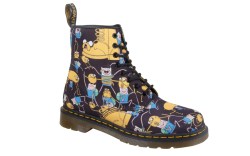 The time has come for a Dr. Martens adventure.

As previously reported by FN, the iconic British brand has collaborated with Cartoon Network on a collection of adult and kids’ boots inspired by the top-rated animated comedy series “Adventure Time.”

To celebrate the partnership, the companies created a short film with brand-new animation, featuring series stars Finn the human and Jake the shape-shifting dog, revealing how they live the Dr. Martens mantra: #standforsomething.

The video goes live worldwide on Sunday, March 1, but FN got exclusive access to air it here.

Check out the full video below:

Also on March 1, the boot collection will go on sale globally at all Dr. Martens’ branded stores and retail partners, as well as on Drmartens.com.

The line, set to retail for 55 pounds to 130 pounds ($85 to $202 at current exchange), consists of three styles: the white-leather Finn Boot, a yellow-leather Jake boot and a multi-character canvas boot. All are offered in infant, junior and adult sizes.

View them all in the slideshow above.

“Adventure Time,” which premiered on Cartoon Network in 2010, follows the exploits of Finn and Jake in the fictional Land of Ooo, where they interact with imaginative characters such as Princess Bubblegum, The Ice King and Marceline the Vampire Queen.

It has also inspired spin-off products, including a comic-book series, video games and an assortment of toys and soft goods. Over the years, graphic T-shirts have been licensed to retailers such as Hot Topic and Threadless and can currently be found in the Cartoon Network store.