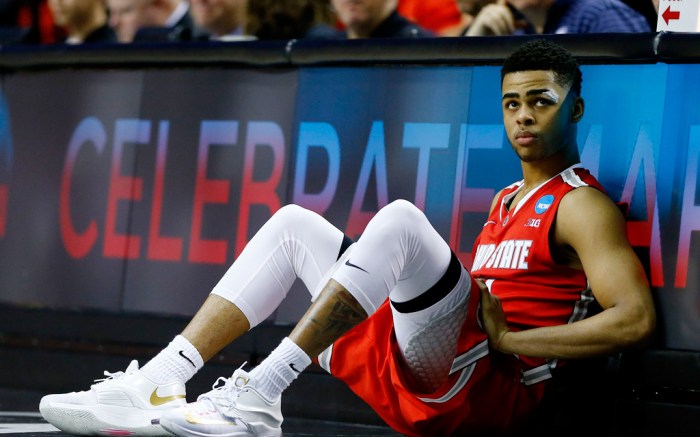 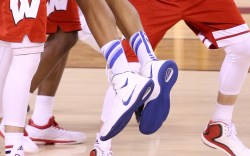 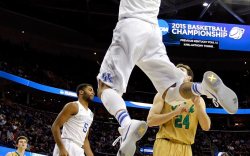 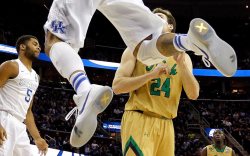 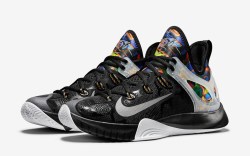 With the NBA draft coming to a close Thursday, the top prospects from colleges here and abroad have new homes with professional teams in the States. Some of these players will undoubtedly land sneaker deals with the industry’s top brands.

Karl Anthony Towns, the first overall pick in the draft, played just one season at the University of Kentucky under legendary coach John Calipari. The center will suit up for the Minnesota Timberwolves next season, playing alongside last year’s No. 1 overall draft pick and Adidas-sponsored athlete, Andrew Wiggins. There is no deal announced for Towns yet, and the last game-time shoes he was spotted wearing were the Nike Zoom Hyperfuse 2014.

The Los Angeles Lakers, a team that has featured Magic Johnson, Shaquille O’Neil, and Kobe Bryant, may have found its next big star in Ohio State guard D’Angelo Russell, the second selection in the draft. Russell was last spotted on the court during the NCAA tournament wearing the Nike KD7 Aunt Pearl.

Duke University’s Jahlil Okafor, who was projected to be No. 1 overall throughout much of last season, hit the court for the 2015 NCAA Champion Blue Devils in the Nike Air Max Hyperposite. He was selected third overall and will play for the Philadelphia 76ers next season.

With the fourth and fifth picks in the draft, the New York Knicks and Orlando Magic selected foreign players who analysts and fans alike believe could be NBA stars in Kristaps Porzingis and Mario Hezonja, respectively. They’ve both been seen in Nikes while playing overseas.

The second Kentucky player to be selected was Willie Cauley-Stein. The current Sacramento Kings player hit the court for the Wildcats last season in a variety of Nike shoes, including the Zoom Hyperrev 2015 Premium and the Kobe X.

The NBA draft featured a rarity on Thursday — a player who already had a sneaker deal prior to signing with an NBA team. Emmanuel Mudiay, who made the jump from high school ball in Texas directly to the pros, playing for the Chinese Basketball Association’s Guandong Southern Tigers, signed with Under Armour and hit the court in China wearing the ClutchFit Drive Low. The guard join the Denver Nuggets next season.

With Mudiay’s sneaker deal already in place, brands are sure to make pitches to other top draft picks in the coming months.