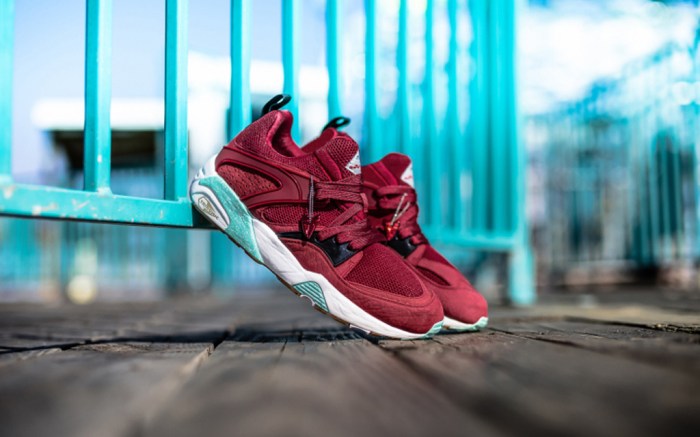 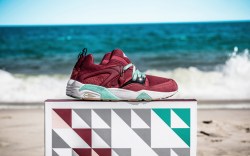 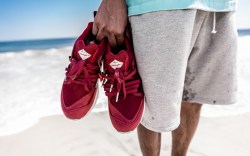 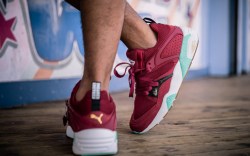 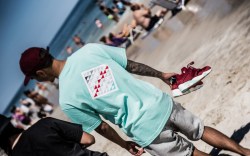 Teaneck, N.J.-based retailer Packer Shoes has collaborated with Germany-based athletic brand Puma for the release of Bloodbath, a sneaker with an eerie nod to shark attacks, using the brand’s Trinomic Blaze of Glory running silhouette.

The collaboration, the third and final in a trilogy with Australia-based magazine Sneaker Freaker, will be sold at a pop-up shop at the Refinery Hotel in NYC on Wednesday, followed by a global release on Oct. 10. The retail price of the shoe has not been released.

The shoe draws inspiration from the New Jersey shark attacks of 1916 (also the inspiration for the film Jaws) and features a creamy crimson red leather-and-mesh upper with black accents, a white outsole with mint highlights, a gum sole and metallic gold Puma branding throughout the shoe.

A video promoting the shoe debuted online yesterday, complete with blood-infested water and hungry sharks, and ending with an image of the shoe.

The story of the trilogy, crafted by the magazine, began with its first collaboration with Puma in 2008, the Great White Blaze of Glory, with a subsequent Black Beast release using the same silhouette. The Great White, designed to emulate a shark in attack mode, featured a shark-bite tongue logo, silver mesh, blue and pink hints on a white outsole and a black plastic overlay on the shoe’s upper. The silver upper was later swapped out for all-black for the Black Beast. The magazine and Puma collaborated on a followup to the Great White in 2013 with Sharkbait, again using the brand’s Blaze of Glory silhouette. The Sharkbait boasted a turquoise nubuck-and-mesh upper with a white, gray and gold outsole.