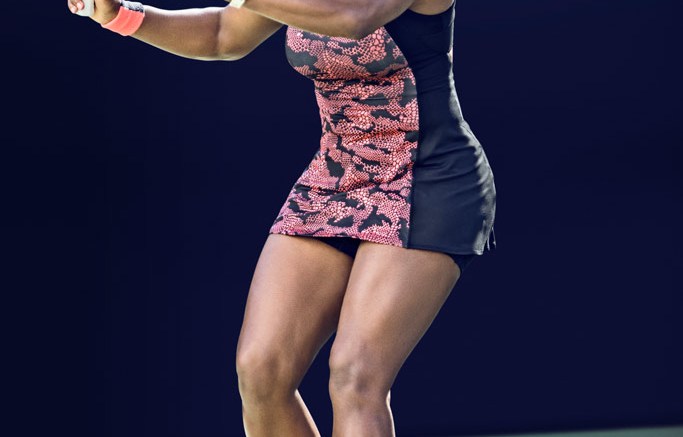 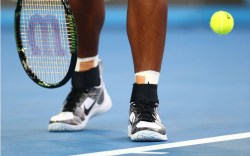 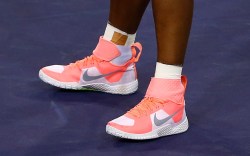 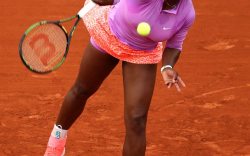 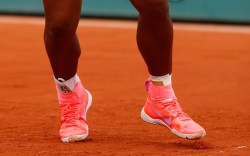 At a special Nike event in New York yesterday, tennis star Serena Williams showed off her latest on-court look, crafted especially by the brand for her and especially for the 2015 US Open, which kicks off on Monday, Aug. 31.

At the tournament, Williams will sport her special NikeCourt Flare sneakers, this time in a black-and-pink colorway featuring a patterned upper resembling a snakeskin print — perhaps a nod to Williams’ personal preference for bold fashion.

Throughout the 2015 tennis season, the No. 1-ranked women’s player has been putting the Flare shoes through their paces, beginning with the Australian Open in late January, when she wore a black-and-white version in honor of Black History Month. Since then, the style has appeared in a soft pink-and-white colorway for the BNP Paribas Open and Miami Open in March, and in a bright coral you-couldn’t-miss-’em-if-you-tried hue for the French Open in May.

Of course, for the Wimbledon tournament in July, Nike created a crisp, all-white Flare sneaker for Williams, in keeping with the tournament’s strict dress code. It was at that time that the athletic brand finally revealed details about Williams’ court shoes, created by Nike veteran designer Aaron Cooper and his team, who took inspiration from a Kung Fu master and the Kobe basketball sneakers.

The lightweight shoe features a drop-in midsole and minimal upper construction, as well as its most obvious and essential attribute: a neoprene ankle cuff. “I was having issues rolling my ankle,” Williams said in a statement in July. “So I wanted to create a shoe that would give me a lot of stability and make me a better player.”

Click through the slideshow to see all the versions of the NikeCourt Flare worn by Serena Williams this year.