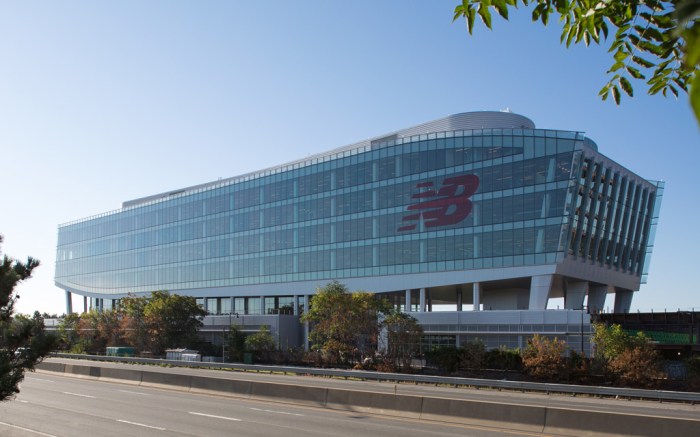 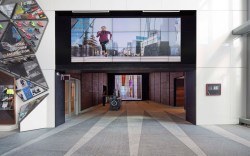 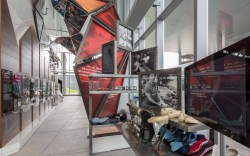 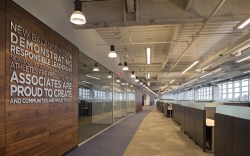 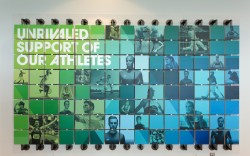 The company will now be located in a 250,000-sq.-ft. headquarters at 100 Guest St. in Boston’s Allston-Brighton neighborhood.

“The office facilities have much more collaboration space and much more innovation space, and we think it’s what the business needed as we continue to grow,” Rob DeMartini, president and CEO of New Balance, told Footwear News in a phone interview Friday. “We’ve been growing at about 15 percent a year for the last five years and we also had a pure physical-space challenge, so now was the time to do it. At our previous headquarters, which is just about 100 yards away, we were very tight on space.”

DeMartini said roughly 400 of its 708 employees moved into the building over Labor Day weekend, with the remaining employees moving in this past weekend.

One attraction of the new headquarters is its atrium, with a Visitor Engagement Center. The center displays the company’s history and current innovations and is anchored by a sculpture with a tripod base reminiscent of a chicken’s foot — the model of perfect balance, according the brand’s founder, William Riley, in 1906 and the origin of the label’s name. The tripod statue is also an illustration of New Balance’s three core values: integrity, teamwork and total customer satisfaction.

In addition to the increased size of the new headquarters, the building features multimedia infrastructure upgrades, something DeMartini believes will significantly benefit business.

“We’ve got social media feeds all over the building that are keeping our employees and associates connected with what consumers are saying about the brand,” he said. “I think the real-time nature of that is what’s required to win in the marketplace today.”

The headquarters is part of Boston Landing, a real estate development in Allston-Brighton that will soon be home to the new Boston Bruins practice facility; a 10-story office building; a green outdoor space open to the community, called “Athletes Park at Boston Landing”; and a new commuter rail station. The development will also have 20,000 square feet of retail space. DeMartini said New Balance will open an 8,000-sq.-ft. storefront in the space.