Jordan, Adidas, Under Armour On Display to Kick Off March Madness 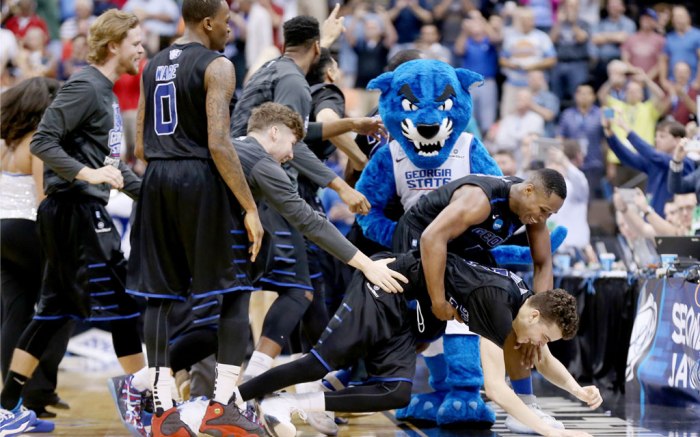 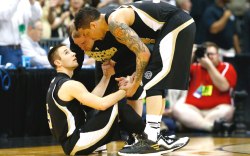 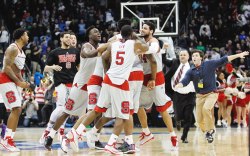 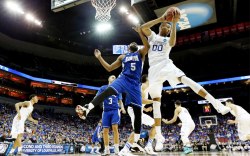 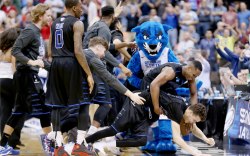 The NCAA men’s college basketball tournament kicked off Thursday — and there was already plenty of drama. The first day of the tournament also meant plenty of hot sneakers.

Here are a few of the kicks the ballers wore on the court to start the tournament:

The Fighting Irish held off a determined Northeastern team Thursday, 69-65. Jerian Grant, who played for all 40 minutes on Thursday, had 17 points in the win while wearing a green-and-gold pair of Under Armour’s ClutchFit Drive Low.

The Georgia State Panthers pulled off one of the more shocking tournament upsets Thursday, knocking off Baylor 57-56 with a clutch three-pointer by R.J. Hunter with less than three seconds left on the clock. Sneaker fans watching the game were sure to notice the black-and-red Air Jordan XIIs on Kevin Ware’s feet, caught by cameras clearly during the post-game celebration.

Ware wasn’t the only player in Air Jordan XIIIs, though his team fared much better than his fellow Jordan-wearing player. The Hampton Pirates faced off against tournament favorite Kentucky and was routed by the Wildcats, 79-56. But Emmanuel Okoroba did come off the bench for the Pirates in some classic sneakers, wearing the white-and-black XIIIs.

More Love for Jordans in Georgetown

It’s fitting that ballers love the sneakers of the greatest professional basketball player who’s ever lived, and Jordans were spotted on most college courts on Thursday. The fourth-seed Georgetown Hoyas took out Eastern Washington 84-74, with guard Tre Campbell putting in nine points in 28 minutes of play. But his stats are secondary to the sneakers he wore, a pair of the black-and-blue Air Jordan XX9s.

Wofford gave Arkansas trouble Thursday, but it wasn’t enough to get the win, as the Razorbacks edged out the Terriers 56-53. After the game, cameras caught senior Lee Skinner in his black, gold and white Crazy Strike Low shoes picking up his visibly dejected teammate Eric Garcia on the court.

Beejay Anya hit the game-winning shot against LSU, and the team’s bench cleared to celebrate the victory on the court. If you’re looking at what the players are wearing in the post-game craziness, most — including Anya – are wearing the gray, red and white Adidas Crazylight Boost.