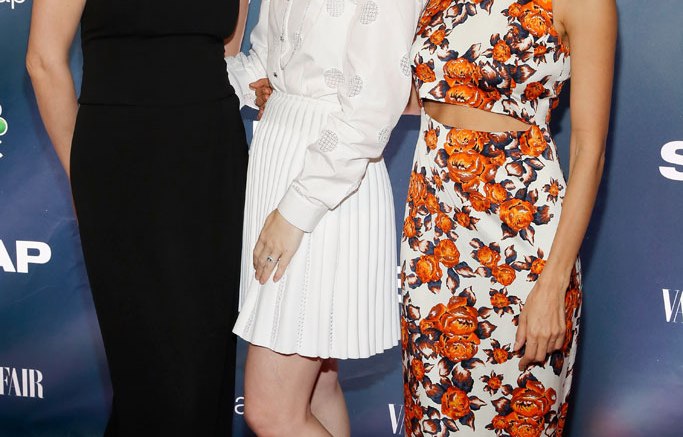 The actresses of NBC’s latest miniseries, “The Slap,” will not be denied their spring wardrobe.

At last night’s New York premiere, stars Uma Thurman, Melissa George and Thandie Newton looked garden-party ready, despite the fact that the temperature outside was a balmy 27 degrees.

George donned a white blouse and pleated white skirt, and completed her look with nude strappy heels by Alaïa. While the ensemble was very pretty, the star was surely very cold.

Thandie Newton didn’t look much warmer in a floral midriff-baring dress by Suno paired with classic white pumps. Someone find these women coats!

At least Uma Thurman had the good sense to cover up with a long-sleeved black dress and black sandals.

The NBC show, which is a remake of a popular Australian novel, traces the shifting dynamics between family members and friends after a casual barbecue turns heated when one man slaps another’s son.

While the reviews are still pretty mixed, one thing is for sure: The show has an outstanding cast. Thurman brings her acting prowess, as do Zachary Quinto and Peter Sarsgaard.

Variety writes of the series: “It does represent the kind of drama that should appeal to a sophisticated palate if the ongoing quality justifies first impressions.”

Will you be watching? Tell us @FootwearNews.

Check out more celebrity statement shoes in the gallery above.