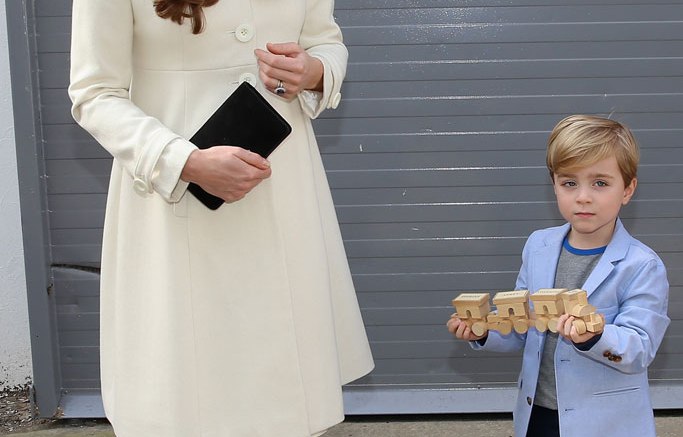 Kate Middleton, a self-professed fan of the hit TV series “Downton Abbey,” visited the Ealing Studios in West London on Thursday wearing classic black pumps, her go-to style. The Duchess of Cambridge took part in a meet-and-greet with the cast, including Michelle Dockery, who plays Lady Mary Crawley, as well as Hugh Bonneville and Elizabeth McGovern (Lord and Lady Grantham).

Lord Julian Fellowes, the show’s creator, was also on hand to greet Middleton. And 4-year-old Zac Barker, one of the actors who play Lady Mary’s son George, gave the duchess a bouquet of flowers.

But Middleton’s much-anticipated meeting with Dame Maggie Smith didn’t happen due the actress’ illness. The seven-months-pregnant Middleton, who wore a cream coat by British maternity label Jojo Maman Bebe, unveiled a plaque to commemorate her visit. Mrs. Patmore (Lesley Nichol) and Daisy (Sophie McShera), the ‘Downton’ kitchen maids, even gave her a tour of the show’s famous kitchen.

After a bit of a hiatus, Middleton is back out and about on her royal duties, joining her husband William, recently back from a royal trip to China.

And last week, she visited the Goring hotel for its 105th anniversary and grand reopening after an extensive renovation.