Sneakers Ruled At Foot Locker ‘On Our Feet’ Charity Gala 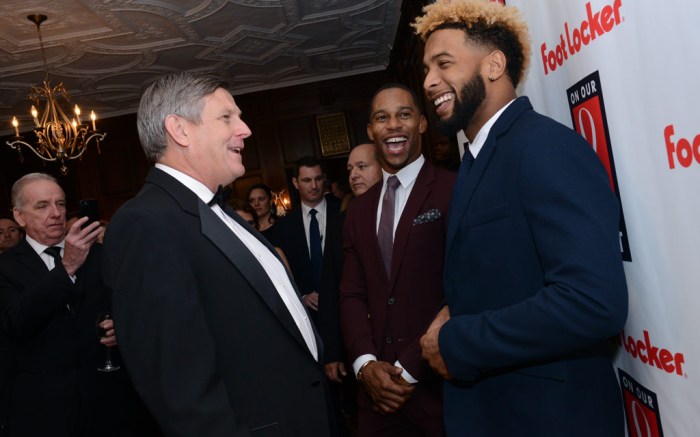 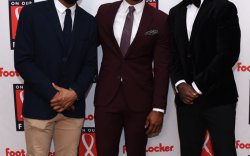 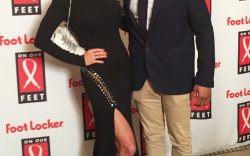 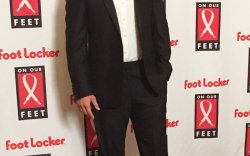 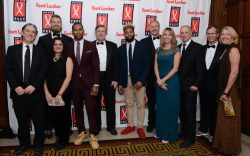 “Who are you wearing?” It’s a common question at fashion and footwear fetes, but at last night’s Foot Locker “On Our Feet” gala in New York, the answers were a bit different.

Supermodel Christie Brinkley stunned in a floor-length gown that she accented with a pair of Golden Goose Superstar sneakers, though she wore them not on her feet but over her shoulder. “I forgot my handbag so I’m using these instead,” Brinkley told Footwear News.

Members of the New York Giants certainly didn’t disappoint when it came to their sartorial choices. Teammates — and Foot Locker commercial co-stars — Victor Cruz and Odell Beckham Jr. both showed off statement sneakers with their suits. Cruz donned the Haystack colorway of his new signature Nike, while Beckham went luxe with Christian Louboutin studded low-tops.

“I do have some of the designer stuff — a lot of tennis shoes,” Beckham told FN. “One day I hope to create my own sneakers, but for now I wear a lot of different things.” He also admitted that the Nike Air Mags from “Back to the Future II” are the sneakers he covets the most. (And his wish could come true soon.)

New York Jets quarterback Ryan Fitzpatrick, meanwhile, was all about comfort in his Nike Zoom Vomero 10s. “This is my favorite shoe,” he said. “I wear some sort of Vomero every day. And I wear them for training, too.”

Nike also was the brand of choice for Foot Locker’s president and CEO, Dick Johnson, who wore an all-black version of the Air Max 95 with his classic tuxedo.

Though Johnson has been a Foot Locker executive for two decades, this marked his first “headlining appearance” at the On Our Feet gala since taking over the chief executive role late last year. And he’s already learned to negotiate the politics of the job.

“It’s pretty tricky selecting which shoes to wear [to this event], but Nike is our title sponsor so we certainly want to recognize their generous contribution,” he said.

The 15th annual On Our Feet gala benefited educational and youth initiatives supported by the Foot Locker Foundation, including the Foot Locker Scholar Athletes Program, which each year hands out $400,000 worth of college scholarships to 20 exceptional students.

Students can apply now for the 2015 scholarships at Footlockerscholarathletes.com, until 5pm EST on Dec. 17.

Click through the slideshow to see what everyone wore last night.