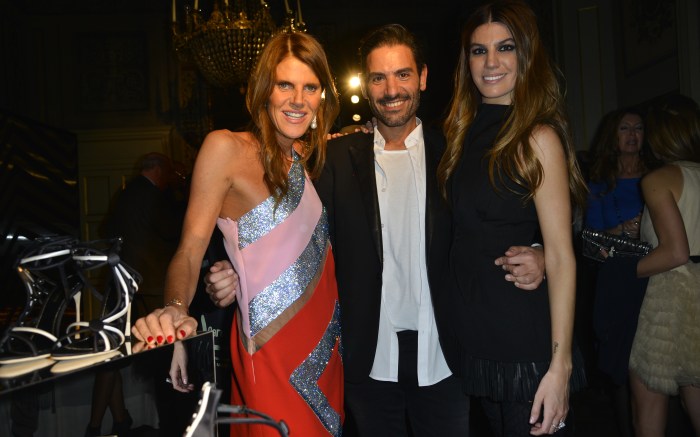 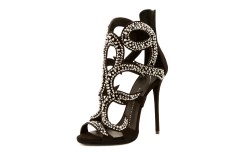 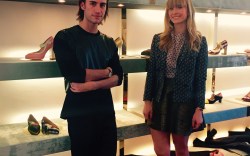 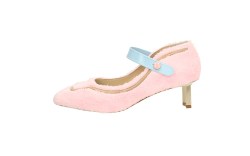 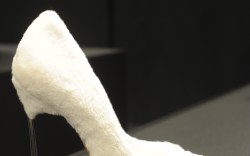 A mashup of the brash and the beautiful inspired the theme for Giuseppe Zanotti’s latest collection, titled Aristocrazy, shown over the weekend in Milan.

“It started from memories of castles and old places my interior designer dad showed me,” the designer said as an influx of editors, stylists and overdressed bloggers swarmed his Montenapoleone showroom for the fall ’15 presentation. “The crazy part came from fashion being influenced by all these new people and street fashion. And, of course, myself being a little crazy.” he laughed.

While younger designers often try to convey a maturity that is beyond their years, and more senior talents attempt to remain eternally youthful, Niccolò Beretta of Giannico was quite content to explore relatable references for his age. “I wanted to emphasize the fact that I am very young,” admitted the 19-year-old wünderkind. “I designed the collection around [the film] Lolita.” Plush-toy fabrics, lollipop colors, lip patterns and sweet Peter Pan-collared pumps (listen up, Alexa Chung) paid cheeky homage. But the most memorable flourish had to be smelled to be believed: Mary Janes with interchangeable scented plastic straps. “The idea came from the perfumed rubber toys I had as a child,” he said, not having to think back that many years.

At Sergio Rossi, designer Angelo Ruggeri debuted his new muse: fashion plate and international It Bella Bianca Brandolini D’Adda. “People always ask me who is ‘my woman’ as a designer,” he said. “Bianca represents this perfectly because she is Italian, and it was love at first sight.” The feeling, apparently, was mutual. “Angelo is amazing, and it was easy. Every shoe here is completely my style,” said the loafer-clad Brandolini D’Adda of the all-black lineup.

Some things require extra effort. “This was definitely the hardest to get just right,” said Cesare Casadei, petting his sheared mink-covered Blade pump. “It was a challenge to get it looking sophisticated. I wanted it to be like a diva in the winter with her fur muff. My inspiration was the ’60s and the mood of Pierre Cardin,” he said of the sleek lineup, which also included patent go-go boots and curvy velvet stilettos.

For Brian Atwood, a trip to Istanbul was the starting point for his latest offering. “I’ve been going back and forth because we opened a shop-in-shop there at Harvey Nichols,” he shared. “I took my colors and motifs from what I saw there, from the Grand Bazaar to the architecture of the mosques.” Spice shades, intricate patchwork and metallic details had Ottoman empire opulence to spare, as did the setting: the Palazzo Visconti. Ain’t it rich?