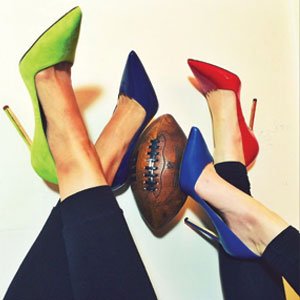 Not surprisingly, the Super Bowl dominated much of the Instagram buzz this week. From Gisele Bündchen to Katy Perry, fashion had the inside view on the big show.

Katy Perry, the Super Bowl’s hit halftime performer, put on quite the show.

Perry’s big moment might have been slightly overshadowed by a poorly synchronized dancing shark and a killer performance by Missy Elliott, but that didn’t stop her getting an “XLIX” tattoo after the show.

There was plenty of buzz about Perry’s costumes and shoes on Monday. The glitter booties by LaDuca were the standout.

Perry’s costume designer, Jeremy Scott, shared his design inspiration for the halftime looks in a behind-the-scenes shot for “Good Morning America.”  Scott donned his flame Adidas Originals slides and said they were the big spark for Perry’s opening look.

And as if Webster needed another big fan of her playful shoes, it looks like her daughter Bibi is up for the challenge.

Other favorite Instagrams took us inside Kylie Jenner’s closet, up close with the Oscar lunch and behind the scenes in the fashion business.