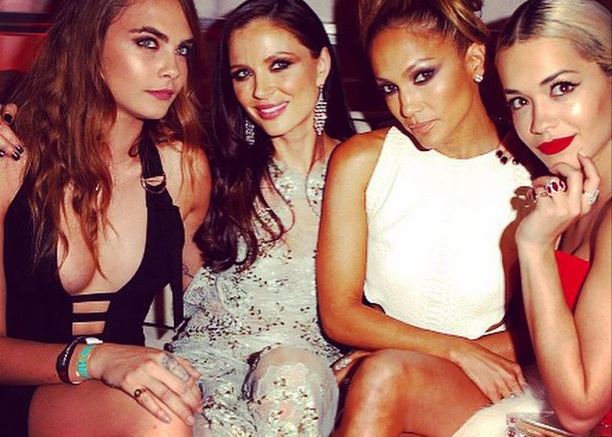 Fashion loves Instagram, and we do, too. Footwear News looks back at the week in shoes, fashion and celebrity to find the “can’t miss” and most fashionable posts of the week.

This week, there was plenty to talk about as the royals joined social media, and the world collectively screamed”Finally!” @KensingtonRoyals on Instagram and Twitter already have about 120,000 followers each. While the accounts have mostly shown the Duke and Duchess of Cambridge and Prince Harry out and about on their royal duties, we are hoping for some more behind-the-scenes action, too. Kate Middleton made headlines for her appearance at the Barlby Primary School in London on Instagram. Prince Harry also appeared on the account standing on tip-toes next to 7-foot-tall retired NBA star Dikembe Mutombo. The prince might need stilts, or some very high platforms, to pull that off.

Other favorite moments included the Golden Globes, which kicked off awards season on Sunday, Jan. 11. Jennifer Lopez made a major entrance with a plunging Zuhair Murad gown and Stuart Weitzman heels. She also appeared in a major fashion-girl group — Georgina Chapman of Marchesa, Cara Delevingne and Rita Ora — at the Globes after-parties. It was quite the power pack of fashion, especially on the heels of Ora’s appearance as a face of the relaunched Adidas Superstar campaign last week. JLo called the group the “#GoldenGlobeBarbies.” We agree.

Other favorites of the week included behind-the-scenes shots at presentations in Europe, from Louis Leeman’s Battleship board game-inspired setup to the return of John Galliano for Maison Martin Margiela. All in all, it was a good week for glamorous fashion, men’s fashion and, of course, the royals.