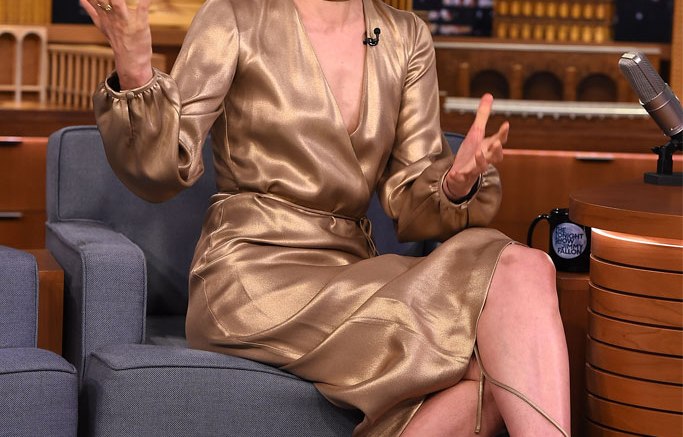 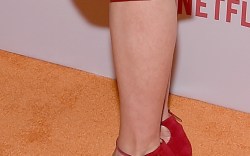 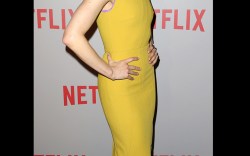 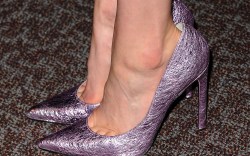 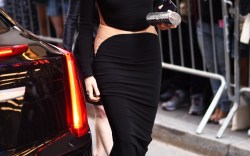 While the rest of the world is binge-watching Season Three of Netflix’s “Orange is the New Black,” star Taylor Schilling continues to make appearances to promote the hit show. On Monday night, Schilling dropped by “The Tonight Show Starring Jimmy Fallon” in a Georgine gold frock paired with metallic Casadei sandals.

Earlier in the day, Schilling was seen leaving ABC’s studios, switching out a pair of white Christian Louboutin pumps for black ankle booties after an appearance on “Live with Kelly and Michael.”

Monday marked the first day of shooting for Season Four of “Orange Is The New Black.”

Ironically enough, Schilling told Michael Strahan that even though the show is the most-watched on Netflix, she does not receive a free subscription. “I’m getting my monthly Netflix bill, but I also don’t want to stop paying for it because I like watching it. But they won’t give it,” she laughed.

FN talked to costume designer Jenn Rogien (also of “Girls” fame) and got the scoop on the show’s footwear. Check out what she had to say, here.

There are plenty of standout shoe moments in Season Three. In one scene, there was a flashback moment featuring character Flaca Gonzales describing what a flatform shoe is.

To see what else Schilling has been wearing on her feet for her latest promotional appearances, click through the gallery.