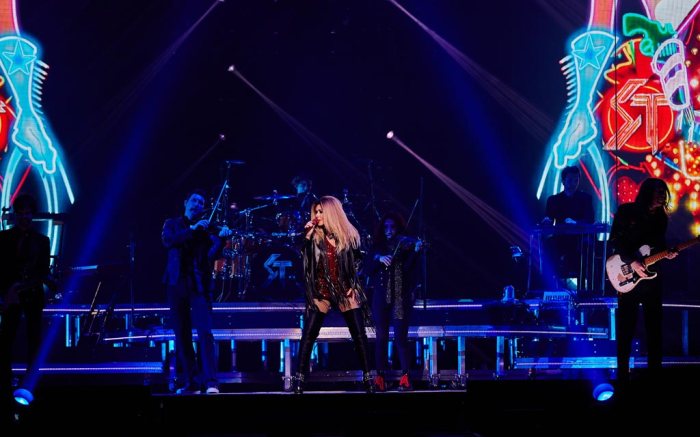 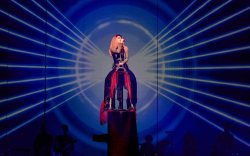 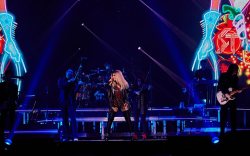 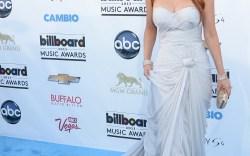 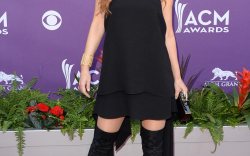 Tonight, Shania Twain brings her “Rock This Country” tour to Madison Square Garden — and she’ll be performing in a number of arena-worthy shoes. FN caught up with her stylist, Tiffany Gifford, to hear more about the singer’s footwear on and off the stage. “Shania is currently quite obsessed with the Saint Laurent Candy that was a new style for spring,” Gifford reveals of the platform heels. “She has it in a few versions and incorporated one pair into her tour. She loves the height of the platform, as she’s quite petite, and the comfort [is great] for on and off the stage.”

For Twain’s “Up!” and “Man! I Feel Like a Woman,” Gifford and Twain paid tribute to her memorable music videos with an update of her signature over-the-knee boots, custom-made by La Duca — a favorite of marquee performers and Broadway dancers.

Even when not belting out her hit songs, Twain often wears similarly leggy pairs. “She does have a favorite pair of Roberto Cavalli over-the-knee micro-suede boots that she loves. They’re stocking-style boots, fitting close to the leg, that are incredibly flattering, with a platform that makes them quite [walkable] as well,” says Gifford.

The country-pop star has also made multiple red carpet and other high-profile appearances recently. “She’s worn a variety of brands for press and shoots to promote the tour, including Saint Laurent, Charlotte Olympia and Tom Ford,” says the stylist, who also works with Miranda Lambert.

Twain also supports newer talent, wearing shoes designed by her friend Chloe Gosselin. She even auctioned off a signed pair of her own Datura pumps, raising $3000 for her charity, Shania Kids Can, last year.

Watch a video of Twain talking up Gosselin’s shoes here.

It’s been 11 years since Twain last went on tour, and while her style has certainly evolved over the years, there are definite constants: a love of platforms to lift her 5’4″ frame, playful sneakers and sky-high boots. She has often been ahead of the trend curve, sporting these of-the-moment styles well before they became mainstream. When it comes to her footwear taste, Twain does Impress FN Much.

Click through to look back at some of Shania Twain’s shoe standouts from her current concert tour all way back to 1999.