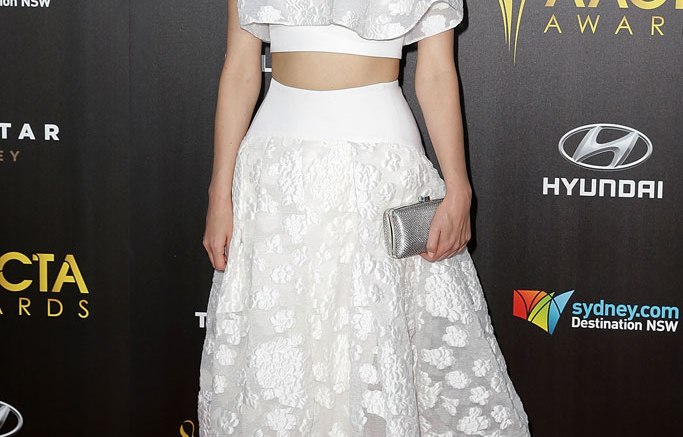 Rose Byrne had all eyes on her Thursday as she hit the red carpet in Sydney for the Australian Academy of Cinema & Television Awards (AACTA).

The bobbed star wore a white two-piece look by Melbourne-based designer Toni Maticevski, with none other than Kurt Geiger heels. The glittery spiked Bond design is part of the KG by Kurt Geiger collection and retails online for $550. Byrne managed to maintain her balance in the approximately 5-inch heels while she posed for pictures and greeted fans alongside her boyfriend, actor Bobby Cannavale. (The two worked together in the recently released “Annie” film.) Byrne took home the Trailblazer Award for exceptional work in the global film industry.

In the past, Byrne has frequently embraced towering heels, including Casadei’s ubiquitous Blade pump, Jimmy Choo’s cap-toes, and a burgundy suede pair by Topshop. FN fully appreciates the actress’ high end-to-High Street range and will be keeping both eyes on the talented star’s red carpet reveals in 2015.

The 35-year-old actress also famously starred in “Bridesmaids” as the new pal moving in on Kristen Wiig’s BFF, played by Maya Rudolf (the bride). Several of Byrne’s co-stars from the hit comedy — including Wiig and Melissa McCarthy — just signed on to star in the “Ghostbusters” all-female reboot, due out in July 2016. Fans have been speculating about the new film on Twitter for weeks, but the cast found its biggest supporter in none other than the co-writer and co-star of the 1984 film.

“The Aykroyd family is delighted by this inheritance of the ‘Ghostbusters’ torch by these most magnificent women in comedy,” Dan Akroyd said in a letter to The Hollywood Reporter. “My great grandfather, Dr. Sam Aykroyd, the original Ghostbuster, was a man who empowered women in his day, and this is a beautiful development in the legacy of our family business.”