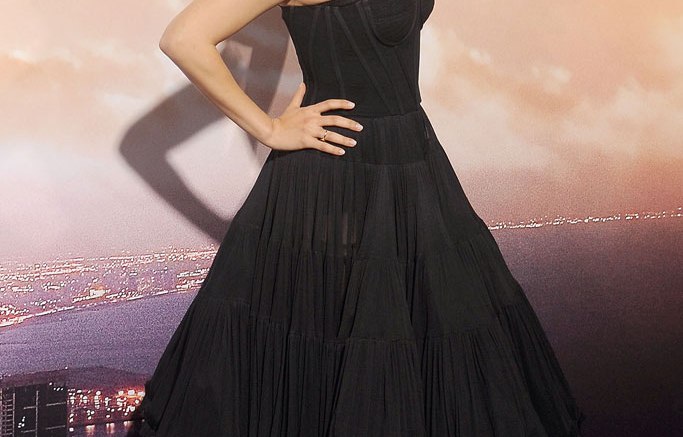 Forget showing off a toned post-pregnancy body (though Mila Kunis has that, too). Ashton Kutcher’s other half struts the red carpet in stunning style.

Her shoe of choice? Christian Louboutin’s lace Tiny, which retails for $945 on Net-A-Porter. Kunis teetered on the 12-centimeter (approximately five-inch) heels on the red carpet for her latest film, “Jupiter Ascending,” a futuristic sci-fi journey through the cosmos. The film also stars Channing Tatum and Oscar-nominated (and FN male style crush) Eddie Redmayne.

It has been four months since Kunis gave birth to daughter Wyatt Isabelle with partner Ashton Kutcher, to whom she may already be married, if certain reports are to be believed.

The 31-year-old told Ellen Degeneres on Tuesday that her daughter was a “hearty eater” from Day One:

“She’s a really good baby. She was nine-and-a-half pounds when she was born,” Kunis explained. “Because she was so big, she was like a hearty little thing; we skipped the newborn stage. And so she was like a good, hearty eater.” Degeneres brought up a photo that Kutcher posted on Instagram in January, signed by “The Kutchers,” which had fans speculating that the couple had already tied the knot.

“It says ‘The Kutchers,’ so it sounds like you’re married,” Ellen said. When Kunis had no response, the host continued: “I’m gonna say ‘yes.'”

Which suggests a very important question: What did the bride walk down the aisle in? Your guess is as good as ours, for now.

Meanwhile, take a look at a few standout celebrity statement shoes in the gallery above.