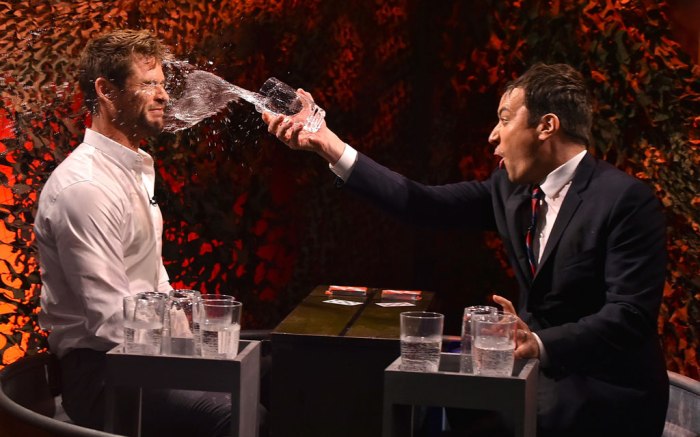 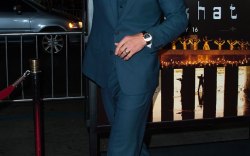 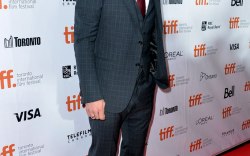 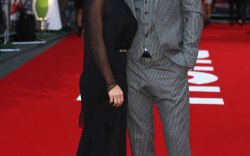 Jimmy Fallon doesn’t do anything by halves. Earlier this week the host of “The Tonight Show” welcomed “Blackhat” star (and People’s Sexiest Man Alive 2014) Chris Hemsworth to his show – with a water fight.

What started as a simple premiss: a game of War, ended with the Aussie actor getting drenched by a super soaker. Fallon set the stakes high so that every time a player lost a round of the card game, his opponent got to throw a glass of water in his face.

“Sorry I didn’t think it was going to be that aggressive,” Fallon said, giving the super soaker a try as he explained the rules of Water War. “I hope I don’t lose.” Fortunately for the studio audience (and online viewers alike) it was the “Thor” actor, wearing a white button down and brown lace-ups, that met defeat on air. Take a look:

With Hemsworth’s new film “Blackhat” make the promo trail now, FN decided to look back at the at the 31-year-old’s best shoe moments in recent years. It’s no secret he has a penchant for Italian labels – his premiere style generally comes from either Dolce & Gabbana or Gucci – but what about his footwear? Hemsworth is just one of the top billed actors – including Eddie Redmayne and Ryan Gosling – pushing the boundaries on the red carpet. Whether that means clashing suits and shoes or opting for uber casual styles worn with elegance, these leading men do anything but play it safe. Take a look at Hemsworth’s style so far and let FN know his best look @FootwearNews.