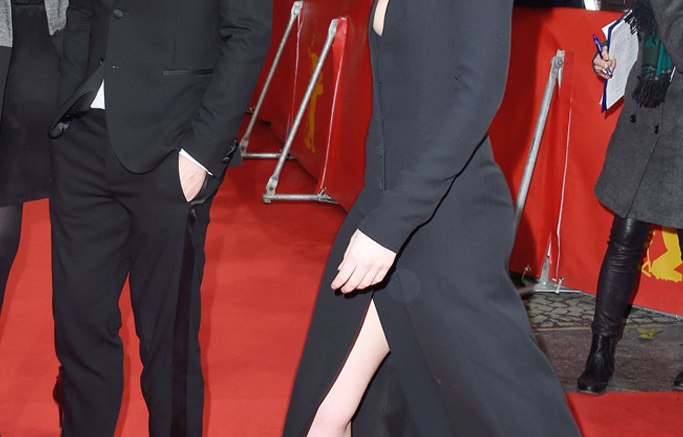 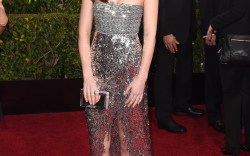 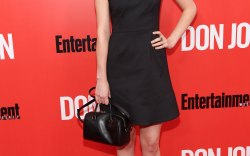 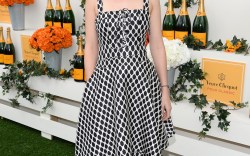 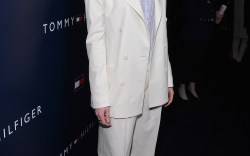 Dakota Johnson has done it again. The “50 Shades of Grey” star wowed in an all black number at the 2015 Berlinale International Film Festival. Lucky for FN, her dress provided a shoe-shot slit, to show off her strappy black sandals.

Wednesday’s premiere, held at Zoo Palast in Berlin, Germany showcased the lead actors in the buzzed about film. Christian Grey himself, aka Jamie Dornan, opted for a polished patent lace-up style. Director Sam-Taylor Johnson donned a long white Stella McCartney dress, with only a small glimpse of her black shoes underneath. Dornan walked the red carpet with wife Amelia Warner, who shined in a summery sandals, but in a standout blue hue. Author E.L. James was also in the house.

But thanks to the racy sex scenes everybody has been talking about, it sounds like Dornan’s wife will not be viewing the steamy film.”She hasn’t seen the film,” he told E! News.

In anticipation of Friday’s release – and for a closer look at all the times Johnson (Anastasia Steele) stunned – scroll through the gallery and check out FN’s coverage: ‘Fifty Shades’ All Set to be Filmed & Shoe Highlights from the Star. Her Golden Globes Jimmy Choo moment is a definite frontrunner in our book.

In case you missed it, Johnson was also on “The Tonight Show Starring Jimmy Fallon” this week (video below), where she whispered phrases into the camera, proving that “any statement can be sexy.”

“Excuse me while I go slip into a pair of old sweatpants,” she said. “Excuse me sir, but this cherry flavored chap stick just fell out of your fanny pack.”

Fallon joked with ordinary phrases that should never be sexy, like “I want to go fishing this afternoon” and “sure, I’d love to take off my underwear, but you’ll have to excuse the cloud of Gold Bond powder.”