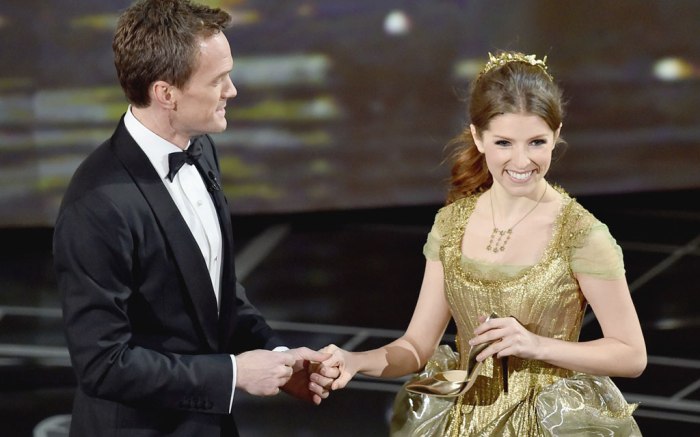 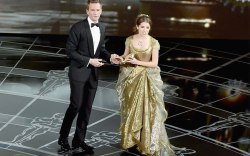 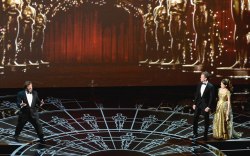 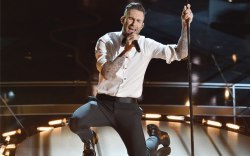 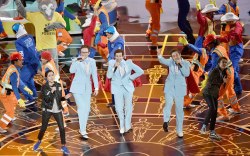 Anna Kendrick soon joined in as her “Into the Woods” character Cinderella, and Harris was her Prince Charming holding her “lost” slipper, a Jimmy Choo shoe.

Earlier in the month, Kendrick appeared on “The Ellen Show” saying she was very nervous for her Oscar performance.

“I mean, I get nervous anytime I perform, because it’s not really what I do. I’m so happy that people ask me to do it, but it’s not really my area, so I do get really nervous, so we’re gonna have to make sure that the heels are low and the dress is loose.” Kendrick didn’t seem to be too nervous when she hit a surprising high note.

Comedian Jack Black made a funny cameo during the performance, provoking Kendrick to throw her gold Darilyn Jimmy Choo pump at his head.

The “School of Rock” actor has made three previous appearances on the Oscars, most memorably when he presented the Oscar for Best Song with fellow comedian Will Ferrell. The two took it upon themselves to address the Oscars’ wrap up music and broke out in song.

Lady Gaga stole the show with a “Sound of Music” tribute, singing “My Favorite Things.” Though you couldn’t see Gaga’s shoes, the singer wowed in a custom Alaia gown.

Pop duo Tegan and Sara and comedy-music trio The Lonely Island, led by Andy Samberg, took to the stage to perform the Oscar-nominated song “Everything Is Awesome” from “The Lego Movie” in a shoe-worthy performance.

In past years, Oscar performers have stolen the show with their iconic songs. Some of the top musical moments from the Academy Awards included Southern rap group Three Six Mafia with their Oscar-winning “Hustle & Flow” song “It’s Hard Out Here for a Pimp” in 2006, and Celine Dion’s 1998 performance of “My Heart Will Go On” from “Titanic.”

Other major performances came from Adele for her first live performance of “Skyfall,” the title track from the last Bond film, and from 14-year-old Michael Jackson with his 1973 performance of “Ben.”

To see the performers’ shoe looks, click through the gallery above. Don’t forget to check out the Oscars hottest red carpet looks, here.