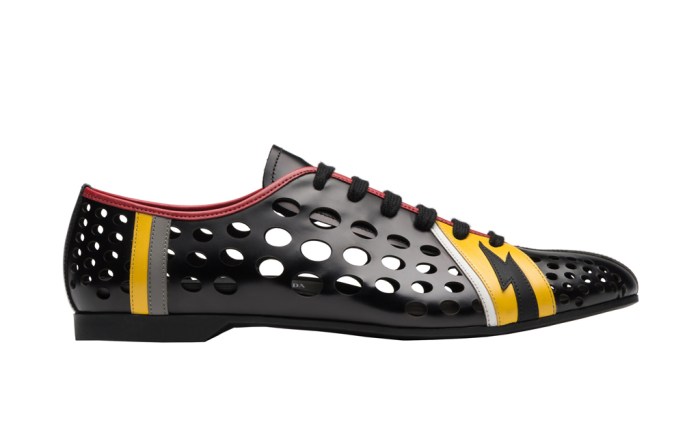 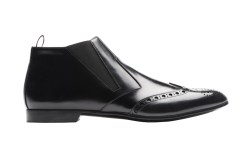 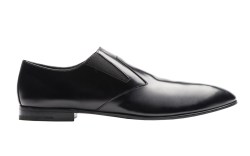 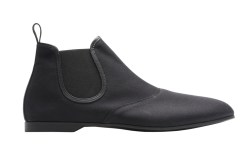 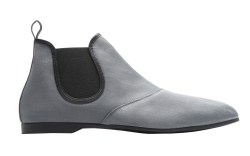 Though Prada’s men’s spring ’16 show was buzzing in Milan for its edited number of women’s looks — which were shown on the same runway, as a preview for resort ’16—Miuccia Prada’s latest collection of menswear indeed held its own within the brand’s footwear category. Now, FN offers a closer look at the men’s shoes.

The collection’s most experimental style came in the form of cutout sneakers. Black leather lace-ups were given oversized circular cutouts and a pop of neon via orange-and-blue piping. Certain styles had strips of leather, shaped into electric bolts and arrows, stitched onto the vamp.

Digitized prints also made their way onto the sneakers, with both car and bunny prints rendered pixelated. A slip-on featured an eyeball print with punchy blue Xs overtop. More classic prints came in the form of horizontal stripes.

The collection also housed Prada’s signature dress shoes. Canvas Chelsea boots were given an elongated toe silhouette, while dressier canvas sneakers had rubber toe caps. A laceless focus was also held in both oxford and ankle boots, which were finished with elastic paneling and broguing details.

For a closer look at Prada’s spring ’16 men’s collection, click through the gallery.