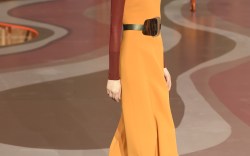 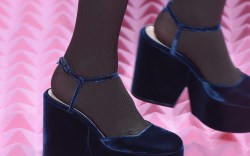 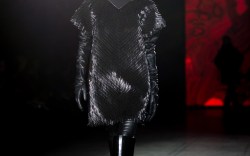 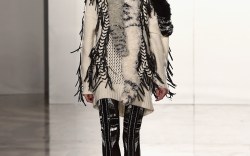 Mary Katrantzou countered her pepto-pink foam runway with delightfully clompy ankle-strap platforms in velvet gem brights – from sapphire to violet, topaz and ruby. The footwear was again in collaboration with Italian designer Gianvito Rossi. With Katrantzou’s abbreviated, boxy hemlines and thick material choices (everything from wool to PVC, spiky palliates and even touches of the runway’s foam) such a substantial shoe was needed to balance out the weight.

The first up: mod white squared-toe cropped boots at Sass & Bide by Australian bookmaker R.M. Willams. The sturdy footwear statement was juxtaposed with wild fur knits and sketch-print hosiery. For day two, Gareth Pugh added a touch of playful reality to his dark, romantic aesthetic with straight-cut wader boots, which went over the knee.