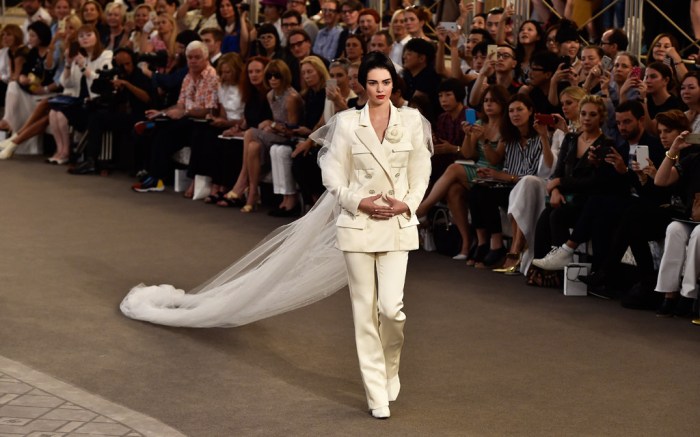 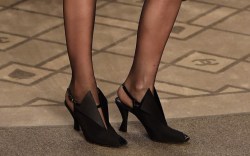 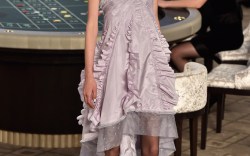 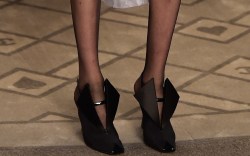 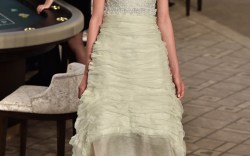 In fashion, nothing is quite as exclusive as haute couture. It’s fitting, then, that Karl Lagerfeld called his latest collection for Chanel “Cercle Privé,” meaning private circle. With that theme top of mind (and shoe), the Grand Palais was transformed into an Art Deco-era casino worthy of the Josephine Baker-bobbed models who sauntered around its perimeter while celebrity guests tried their luck at the various game tables.

Kirsten Stewart and Julianne Moore were among the first to walk the runway before rolling their dice. From there, a motley crew — including Lily Collins, Lara Stone, Jemima Kirke, Stella Tennant, Rita Ora and Lily Rose-Depp — followed. On their feet, all wore the singular style of the collection: a crisp-collared silk slingback.

The silk style was offered in pearlescent shades of dove, black and white — as seen on the finale bride, Kendall Jenner. The shoe, with its distinctive notched heel and angular chisel toe, had an Edwardian flair. It was styled with sheer hosiery, a key trick for the fall season.

While the design was no doubt innovative, especially in a season where many shoes are meant to go unnoticed rather than detract from the main couture message, leg flattery was compromised. Viewed from straight on, the collar detail stopped smack at the widest part of the ankle, creating an appearance of girth on these most spindly of ankles. The foreshortening sacrificed for the squared-off toes didn’t help. While different perspectives are always welcome, these shoes were best appreciated from the side, the body taking a bevel position like a roaring 1920s flapper ready to dance the Breakaway.