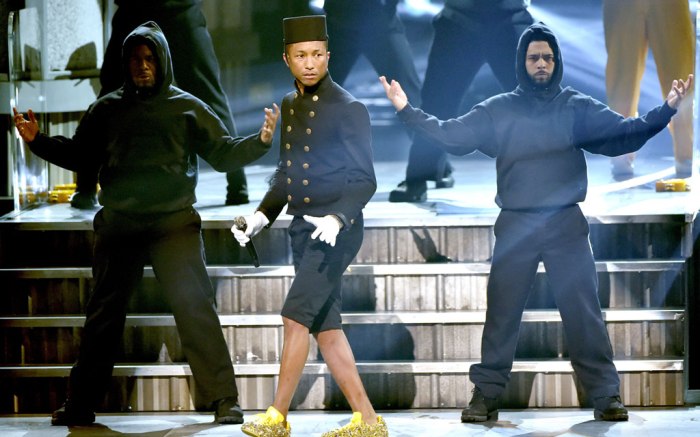 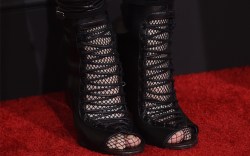 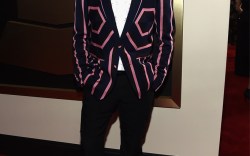 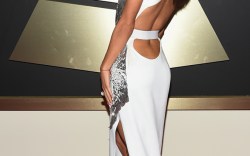 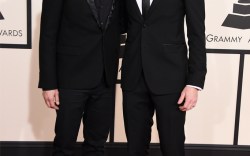 After winning three Grammys for Best Pop Solo Performance for “Happy,” Best Urban Contemporary Album for “Girl” and Best Music Video for “Happy,” Pharrell Williams took to the stage (and the aisles!) for an over-the-top and overjoyed performance of his hit single. But it wasn’t the choir in the aisles, the violinists and dancers onstage or even Pharrell’s Chanel bellhop uniform that we couldn’t stop watching. It was his custom yellow and bedazzled gold Adidas sneakers, which sparkled as he glided across the stage. “From my desk to his feet in 6 days,” captioned Adidas designer Paul Mittleman on his Instagram account about the dazzling sneakers.

From my desk to his feet in 6 days. #superstar #supercolor #pharrell #grammy’s #adidas @adidasoriginals @pharrell

Williams, who collaborates with Adidas for a signature line, is no stranger to fashion statements. Last year, his “Arby’s- style” hat (which was actually Vivienne Westwood) almost broke the Internet with the amount of memes produced to mock it. (Williams even got in on the joke. When Arby’s tweeted, “Hey @Pharrell, can we have our hat back?,” Williams responded: “Y’all tryna to start a roast beef?”) complete with smiley faces.

This year, on the red carpet, Williams wore a head-to-toe 3M Adidas outfit and shoes in all gray. Or was it? “When a light hits it, like a flash, it all turns to white. Super bright white,” Williams told “E! News.” And indeed it did, from his bow tie to his shoes, the musician’s outfit turned a brilliant white as the cameras flashed.

But the statements from the Grammy stage (from Williams and artists such as Prince) weren’t all about fashion. During his “Happy” performance, when the music paused and pianist Lang Lang launched into a passionate solo, Pharrell and his dancers (who wore black hoodies — an homage to 17-year-old Trayvon Martin, who was killed by later-acquitted George Zimmerman in 2012) slowly raised their hands, a demonstration of the “Hands Up, Don’t Shoot” posture during protests around the killing of 18-year-old Michael Brown by acquitted police officer Darren Wilson in Ferguson, Missouri.

See the best Grammy shoes from Williams, Beyoncé, Madonna and more in our Grammy Shoe Gallery.