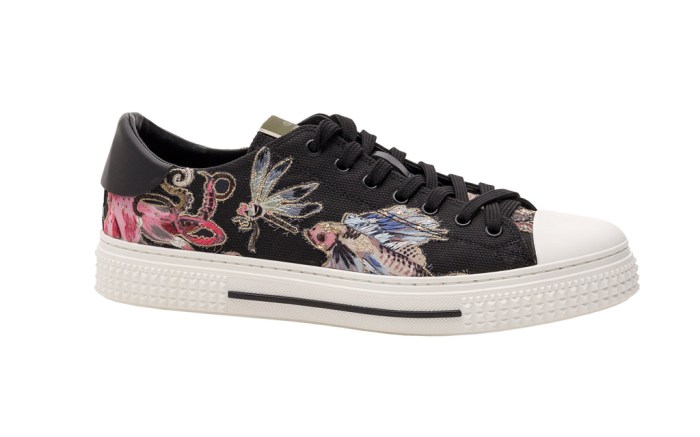 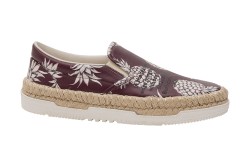 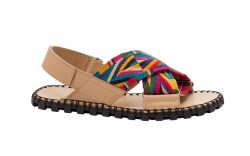 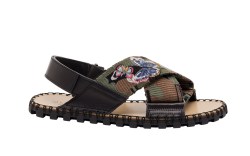 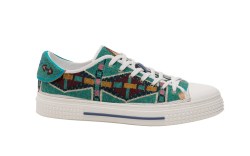 A standout amongst the marathon of men’s spring ’16 shows, Valentino’s footwear collection has officially landed for a closer viewing.

Designers Pierpaolo Piccioli and Maria Grazia Chiuri focused on a sandal and sneaker message for the men’s season, which are categories that traditionally do well for the Italian brand. Slip-on sneakers were given a touch of espadrille inspiration, where thick white soles were given espadrille-style roping. Uppers came in a pebbled white leather, as well as a burgundy leather with white pineapple print.

Crisscross sandals dominated the spring offering. Fabric straps came in both a Mexican serape print and a traditional camo print, which had butterflies printed overtop. The butterfly motif continued on in low-top sneakers, done in a both brown and black leather.

Beading also proved to be a new experimentation for the label. One low-top offered a stars-and-strips motif—an ode to Americana seems somewhat strange for an Italian fashion house—while another style was an obvious reference to indigenous beadwork.

But before one screams cultural appropriation, the house has approached the inspiration with taste, even collaborating with Métis artist Christi Belcourt for its resort ’16 collection.