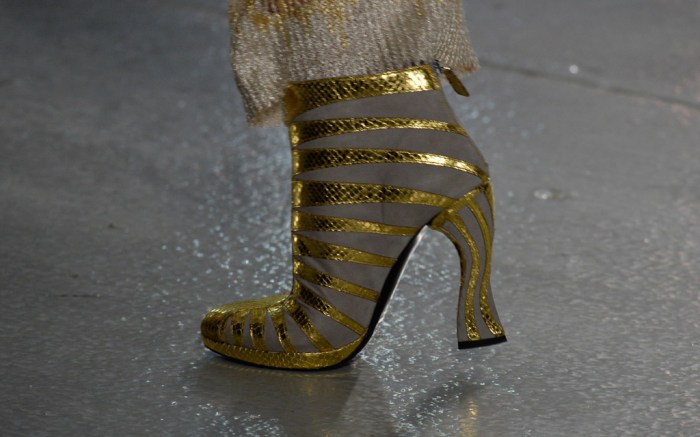 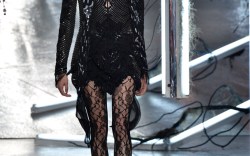 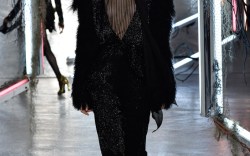 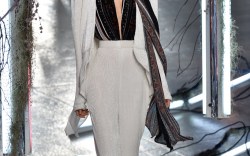 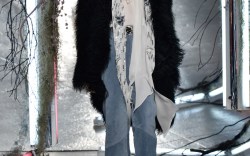 Designers Kate and Laura Mulleavy have never been known to ground their collections in realism. Their spring ’16 show at New York Fashion Week was no different — they presented romantic dresses detailed with frill, sheer, lace, fringe and sequins. More is always more for the Mulleavy sisters, after all.

The footwear this season was especially otherworldly. Since the ready-to-wear was very much vintage and very, very much girly, the designers had their shoes take a harsher stance. Knee-high boots and ankle-strap pumps were done in black suede, striped with metallic leathers that were embossed with a snakeskin print. And all the heels had a slight curve to them, providing a fantasy element that echoed the clothes.

Certain pumps were also done in a gold metallic, which was juxtaposed against lime green stripes. The intricate shoes had a slight royal feel to them — but something that Effie Trinket from “The Hunger Games,” rather than a Kate Middleton type, would wear. All hosiery presented on the runway was in collaboration with Commando.

Although Rodarte has always struggled with its commercial appeal, the design experimentation here was especially refreshing. The shoes offered added visual interesting without distracting from the collection as a whole.

For a closer look at Rodarte’s spring shoes, click through the gallery.