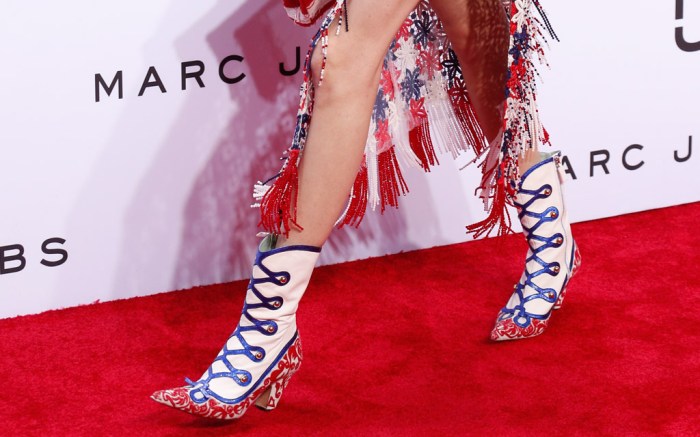 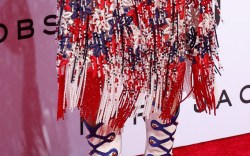 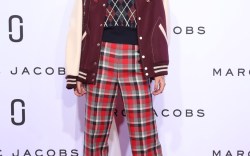 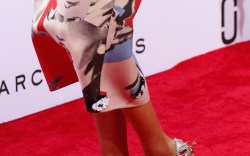 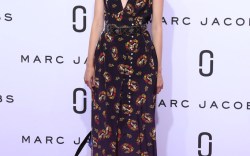 Marc Jacobs has gone and put the “show” back in fashion show. The designer’s spring ’16 presentation was undoubtedly the most theatrical of New York Fashion Week, with a live marching band accompanying a slew of models in festive, razzle-dazzle looks inspired by retro marching- band uniforms.

Let’s start with the footwear: Pointy cowboy-style boots opened the show. They featured electric red and blue piping with faux gold buttons, an accent you would typically see on a circus ringleader rather than a supermodel like Joan Smalls or Kendall Jenner. The shoes got even campier as the show went on, with some ankle boots having a jester-style zigzagged hem.

The same pointy silhouettes were done on laceup boots as well, some in satin or metallic leather, others embellished with a multicolored array of crystals. Evening sandals had two crystal-embellished swans intertwined (Björk redo, anyone?).

Theatrics aside, it was amusing to see Jacobs have some real fun this season. The show served as a reminder that fashion can’t always be so serious. Plus, you can bet these shoes will be on every street-style star’s wish list next season — we can already hear the camera shutters going wild.

The offering did includ sportier, and perhaps more wearable, styles. Strappy flat sandals and running shoes were done in a patriotic red, white and blue colorway in keeping with the festive all-American theme. The Americana focus seemed especially fitting for Jacobs, since he was born in New York and shows in New York — he’s one of the few leading designers who hasn’t fled to Milan or Paris — yet.

For a closer look at the Marc Jacobs spring shoes, click through the gallery.