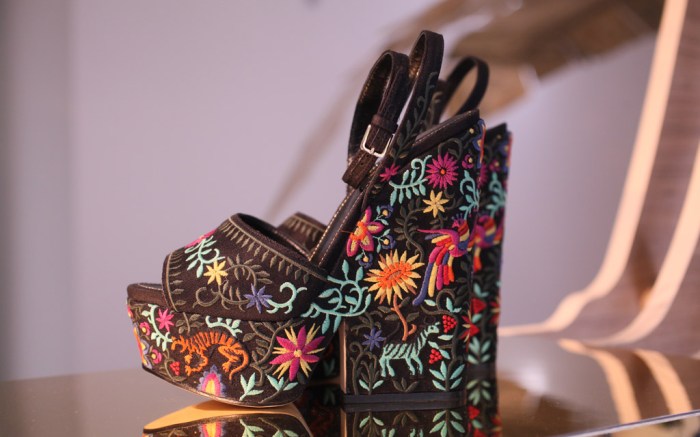 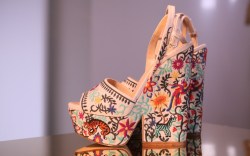 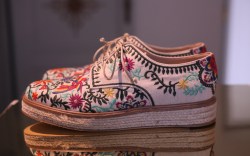 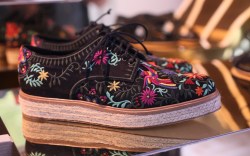 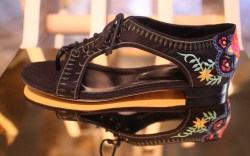 Angelo Ruggeri paired up with muse and guest-collaborator Bianca Brandolini d’Adda again this season at Sergio Rossi. While he’s a skilled creative on his own, they seem to bring out the best in each other, as good friends are known to do.

Upon entering a gilded palm tree installation, it was clear they were making a departure from last season’s all-black lineup of refined staples and Ruggeri was back to what he does best: artful showstoppers bursting with technical feats.

Technicolor heels featured either braided leather or painstakingly applied fine strips for great rainbow graphics. “But we added black to break it up and make them easier to wear,” Ruggeri said.

There was also fine floral embroidery decorating canvas versions and cutout oxfords. “Bianca loves her flats,” he admitted. A platform wedge heel (yes, all three) that appeared to be printed was actually paneled in three different types of wood to create a floral motif. Both the shape and mélange of browns had a distinctly ’70s spin.

“I wanted to capture the party spirit of that era and also those natural elements,” he added.

While a flat option was meant to be worn beachside, “these are nightlife shoes,” he said, motioning to another pair of woven sandals, this time in black and gold. Their thicker retro heel suggested a long night on the dance floor, or, as he suggested, “Gloria Gaynor.”

While the future of Sergio Rossi remains unknown as they hang in the balance between Kering group and talks of a potential new owner, the industry can only hope that whomever decides the illustrious brand’s fate appreciates Ruggeri’s rare talent.