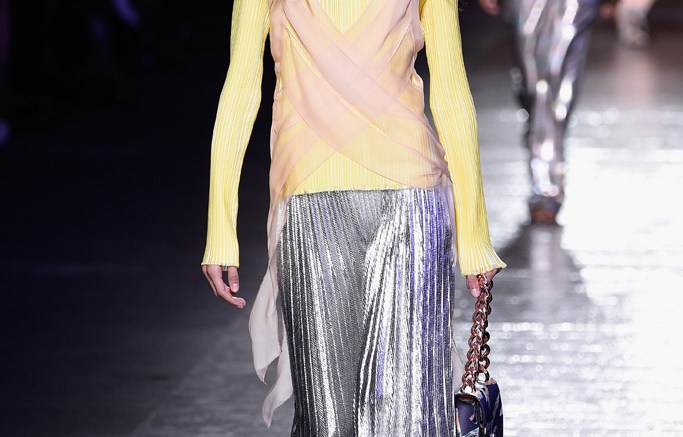 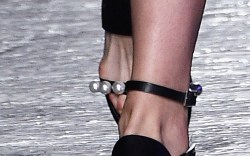 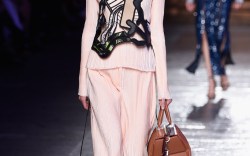 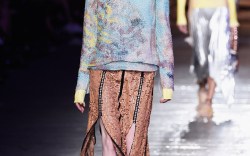 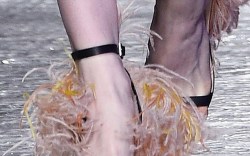 For his debut collection at Emilio Pucci, designer Massimo Giorgetti suggested that perhaps he is something of a shoe fetishist. How else to explain the riotous sweep of ticklish, feather-duster slingbacks, flats and pumps he sent down the runway? The feathers were affixed to both toe and heel — in some cases nearly completely obscuring the shoes beneath. Could they have used a slight trim at times? Sure — especially a version done in bits of brown, black and white rope cording.

While the offering might have seemed out of left field, the house has always been known for unexpected use of materials, and this season’s collection was no exception. Long ostrich feathers, which also were glued to the show’s invites, were indeed a precursor of the kind of spirited direction Giorgetti plans to take Pucci in, one eccentric shoe trick at a time. Hey, a little whimsy never killed nobody.

Elsewhere, Emilio Pucci’s swirly autograph was used to form the shape of shoe straps on gladiators. A clever idea, to be sure, but the styles seemed disconnected from the rest of the collection.

For more of Pucci’s spring ’16 shoes, click through the gallery.

For more of FN’s Milan Fashion Week coverage, see below: