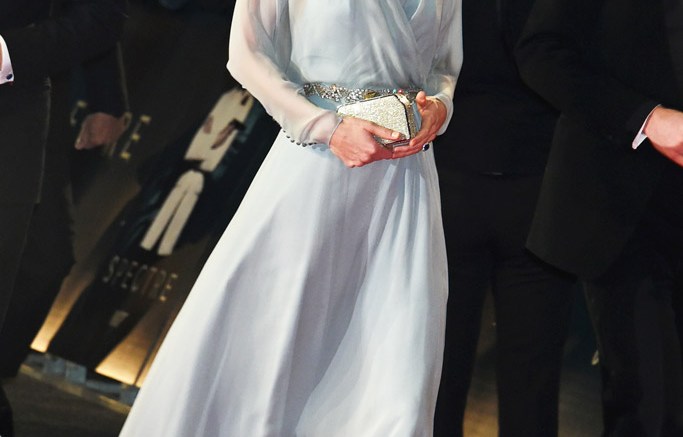 The Duchess of Cambridge chose the label’s Vamp sparkly sandals to pair with her Jenny Packham powder blue sheer gown. She walked the red carpet with her husband, Prince William, and brother-in-law Prince Harry and met the film’s cast, including Daniel Craig, Naomie Harris and Ralph Fiennes.

Middleton has worn this Choo style before, first at a BAFTA gala in Los Angeles back in 2011 and later that fall in Saudi Arabia.

It was the second appearance of the day for the royal trio. This morning, Middleton stepped out for a BAFTA charity screening wearing the Jimmy Choo Gilbert pump and a blue-and-white print dress by designer Tabitha Webb.

Besides the Choo connection, there was another big shoe moment during the event. Kate, William and Harry tried their luck at Wellie throwing — actually aiming a Wellington boot at a scarecrow and other objects. (William did better than his wife and brother.)

Click through the gallery for more big shoe moments from Kate.

How To Get Gigi Hadid’s Celebrity Shoe Style