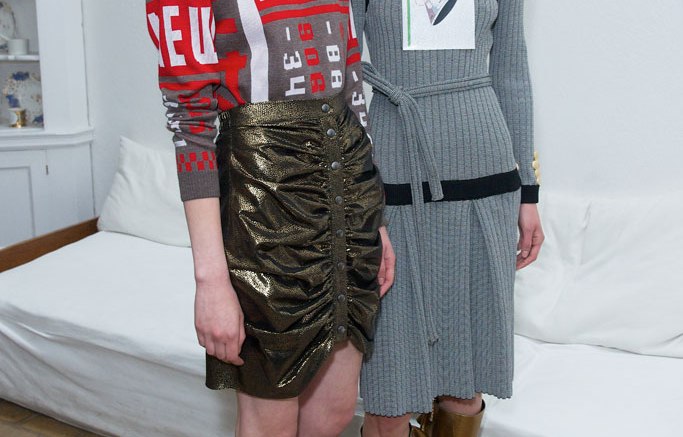 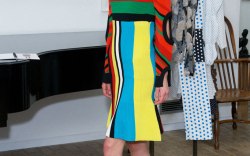 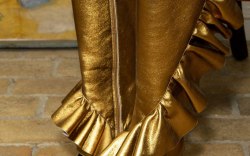 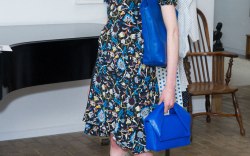 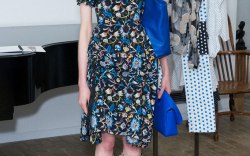 Jonathan Anderson does weird well. His latest resort ’16 collection for J.W. Anderson, of course, wouldn’t be the same if the footwear wasn’t a bit off—and the designer didn’t disappoint, offering oversized ruffling and squared toe loafers.

This season, Anderson focused on a below-the-knee boot message, done in a few different interpretations. His most attention-grabbing pair came in the form of a gold metallic style, which exposed the ankle via a cutout. A large, symmetrical ruffle lined the length of the boot, making it a sort of half-disco, half-Victorian hybrid. He also omitted the ruffle for a sleeker, all-black leather version, which is about as classic and conventional as he will ever go.

As polarizing as the ruffles and metallics were on the flashy shoes, Anderson at least had his eyes on practicality at the end of the day—they all featured a thick wedge heel, which means these boots are indeed meant for walking.

Continuing the metallic focus, Anderson also used a silver on squared-toe loafers, a shape that’s popped up a few times this season but is unlikely to be a commercial success. The style also featured a plastic buckled strap, something fellow London designer Christopher Kane has made his thing on footwear for the past few seasons.

For more of J.W. Anderson’s resort ’16 shoes, click through the gallery.