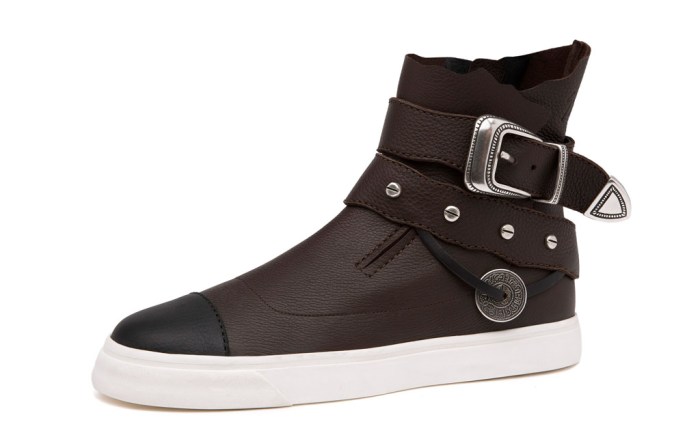 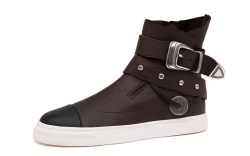 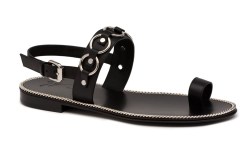 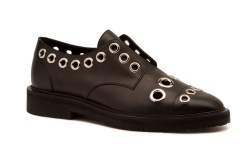 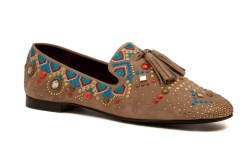 Giuseppe Zanotti’s spring ’16 men’s collection is titled Rebel Angels. This season, the footwear designer focused on a 1970s motif — which is already proving to be a trend for the season — and used fringe, beaded and snakeskin treatments on his signature sneaker styles.

“Rebel Angels is the mood of the new Giuseppe Zanotti man,” Zanotti told Footwear News. “The rebel style of California in the ’70s is entwined with edgy styles. Leather cowboots, beaded moccasins and fringe booties are featured along with grommets, studs and metallic details for an irreverent spirit.”

The Cheyenne high-top sneaker in a brown leather featured an oversized Wstern-style buckle as well as a ragged, unfinished hem. Zanotti’s Gipsy smoking slipper, in a tan suede, continued the ’70s vibe with colorful beading and embroidery.

The Franz laceless dress shoe featured silver rivets along the vamp that were reminiscent of bullet holes (perhaps a bit of John Wayne inspiration crept in). Zanotti’s signature Vegas high-top sneaker was updated in various finishes, including a metallic snakeskin print — a modern take on a Western boot.

For a closer look at Giuseppe Zanotti’s spring ’16 men’s shoes, click through the gallery.