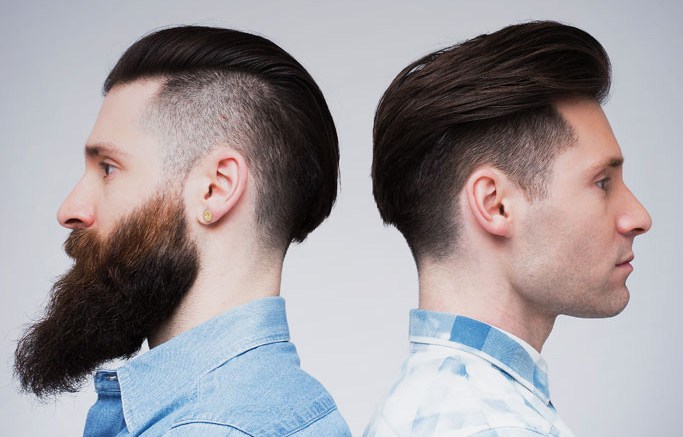 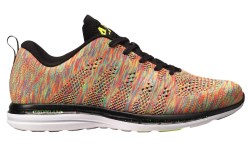 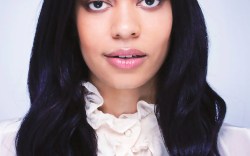 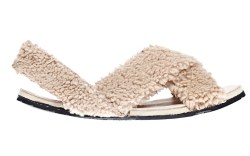 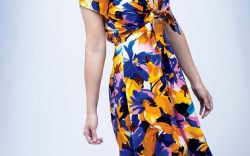 The future of footwear burns brightly. Here are 20 bold new designers you need to know.

Why them? A unique medley of daring, unbridled ambition and talent to spare.

“I’m not afraid to show my age,” declared 19-year-old Milanese whiz kid Nicolò Beretta, whose rise reads like a fashion fairy tale. At 15, he had a chance encounter with Manolo Blahnik, who looked through his portfolio and gave him the confidence to start Giannico. “He encouraged me to make my ideas a reality,” Beretta said. He took the advice, and was selected to participate in Italy’s Vogue Talents competition for fall 2014. Soon after, TheCorner.com picked up Beretta’s often surreal, artful (see his signature Koons pump, above), Instagram-friendly collection, such as fall ’15’s ode to Lolita. “A very young, innocent girl who is not that innocent at all,” he mused.  — Mosha Lundström Halbert

After scoring the coup of having their Load ’N’ Launch technology banned by the NBA in 2010, 28-year-old Los Angeles twins Ryan and Adam Goldston, who had founded Athletic Propulsion Labs a year prior, garnered serious street cred for their trainers. “We played basketball in college and always wanted to jump higher,” said Adam. “We worked for four years in our dorm room creating the technology.” Now, the brand is carried by Saks Fifth Avenue and Mr.Porter.com, with plans to expand into lifestyle categories. “With fashion and athletic wear intersecting, we’re sitting in a unique place,” said Ryan. — Christian Allaire

Aurora James isn’t afraid to be offbeat. “My shoes are very different-looking,” she said. “I like to play with texture.” The 30-year-old designer — who produces her women’s, men’s and kids’ shoes in South Africa, Ethiopia, Morocco and Kenya — stays true to regional styles by using natural materials in looks such as her fur Babouche mule and tire-sole sandal. “It was disheartening that [these areas] were losing their traditional shoe shapes in favor of Western culture’s trend list,” James said. “I wanted to preserve and reinvent them.” — C.A.

Sarah Flint, 26, launched her Italian-produced, retro-leaning women’s collection in 2013 with a goal of creating “something you can go to work in, but still feel elegant and feminine,” she said of her signature low heels. After studying at Parsons and FIT, Flint moved to Milan to attend Ars Sutoria and familiarize herself with the inner workings of the factories. Today, her line is carried at Barney’s, and she can count Blake Lively as a fan. — C.A.

After studying at Ars Sutoria in Milan, Australia’s Emily Cooper, 32, started a men’s line of natty footwear to satisfy her brother’s quest for a cool pair. But soon, her girlfriends (including Meandher ambassador and pal Poppy Delevingne) came calling for boyish loafers of their own. Sensing a hole in the market, Cooper quickly switched gears. “It’s actually really hard to find true menswear styles shaped for women’s feet,” said the Austin, Texas-based designer, noting that metallic finishes and feminine fabrics give traditional monk straps and oxfords a rad spin. — M.L.H.

How did Pichard end up in footwear? “It was very spontaneous,” said the 32-year-old, who launched in 2011. “I won a competition for young designers, and three seasons later, I was sold at Le Bon Marché.” The Paris-based designer, who is now carried at Colette and Dover Street Market, uses eye-catching materials — from laser-cut leathers to treated satins. On her customer wish list? “Pamela Anderson. This dream came true.” — C.A.

Island life infuses Valia Gabriel’s eponymous sandal collection, which is handmade in Greece and takes cues from her travels there. “I wanted something that would reflect my own style and personality,” said the 40-year-old, whose home base is in the Bahamas. The minimalist line launched in 2011 and has been picked up by Net-a-Porter and seen on Alessandra Ambrosio, but Gabriel has a simpler goal: “to always try and make it better.” — Jennie Bell

The Article No. team has a discerning customer in mind during the design process. “We’re appealing first and foremost to ourselves,” said Joshua Willis, one of the brand’s four founders. “If it stands up to that test, then we know it will work.” In a competitive space, the confident California-based label landed retailers Barneys and Kith. “Our lasts, combined with our athletic aesthetic and luxury materials, make for a unique signature.” — C.A.

Combining her Swedish and Saudi Arabian heritage, Atlanta-based designer Miriam Aldainy takes a worldly approach to her women’s collection, which launched last season. “The designs reflect my distinctive background,” Aldainy, 33, said of the Scandi-style sharp lines and eight-pointed star motifs that evoke Middle Eastern architecture. “I call my shoes modern arabesque.” It’s fitting, then, that she launched with an event at Dubai’s Level Shoe District. — M.L.H.

Co-founders Jonathan Horemans, 30, and Javier Goggins, 31, see their loafers paired with everything. “We love wearing the same shoe with a tuxedo or jeans,” said Horemans. The styles are handmade in a Paris atelier. “We couldn’t find a great-looking, comfortable shoe that was appropriate for work and travel,” said Goggins. Galet is touring the Hamptons this summer in a mobile pop-up and will soon open a Paris flagship that will offer bespoke services. — C.A.

After attending Ars Sutoria, London-born, Kuwait-based designer Najeeba Hayat, 24, started her label (named for a heroine in 19th century Russian literature) in 2013. “It’s my own cartoon spin on Victorian forms,” she said of her whimsical-meets-walkable silhouettes, which are made in Italy. “I want to appeal to happy girls who find joy in my escapist aesthetic. I dream of dressing the Auntie Mames, Gigis and Eloises of the world.” — M.L.H.

C.B. MADE IN ITALY

“Today’s dearth of chic simplicity,” as Cecilia Bringheli put it, motivated her to start a women’s and men’s label with her brother Lorenzo in 2010 that captures the sprezzatura of the Milanese cognoscenti. “Growing up, I always saw our mother wearing oxfords, loafers, slippers or sandals,” says Bringheli, 30, who followed suit sartorially. “No matter what, she always put on an elegant flat shoe.” The epicine styles are stocked at Nordstrom, and Bringheli offers custom pairs in classic silhouettes at CB’s boutique and studio in the heart of Milan’s artsy La Brera district. — M.L.H.

After studying at London’s Cordwainers, Dora Teymur, 24, started his women’s label quietly in 2012. “I was ready to talk about my ideas,” said the Turkish designer, who cites the late Carolyn Bessette Kennedy as a muse. “I imagined what shoes she could possibly wear over and over again,” he said of her ’90s elan. The result is unexpected proportions  — blocky loafers, low-heeled boots and high-throated mules. Browns London, Beymen and Opening Ceremony scooped up the current collection. — M.L.H.

“I used to spend hours in the factory in Vigevano watching my father work while my siblings and I played with leather swatches and heels,” said second-generation shoemaker Valentina Carrano, 39. For spring ’15, she went at it alone, launching an eponymous collection of Romance era-inspired styles — nabbing a Bergdorf Goodman exclusive along the way. “All my shoes are named after historical courtesans,” she said. “The educated, influential and stylish women of their day.” — M.L.H.

Aleksander Siradekian, 37, has come far since helping his grandmother at bespoke shoe fittings as a boy in his native Georgia. “I was very opinionated. The owner was not [happy],” he remembered. Since then, the graduate of Tbilisi Academy of Arts moved to Moscow and began showing his theatrical footwear in local exhibitions. “My shoes are not for everybody, but for a person who is ready for my vision of beauty,” he said of his outlandish-versus-ordinary label, which is carried at Level Shoe District and Tsum. — M.L.H.

Like the namesake Italian noblewoman who became a queen of France, Francesca Pisano’s color-saturated footwear line is a study in contrasts. “My shoes are always bicolor — that’s my signature,” said the Miami-based designer, 29. Other characteristics include rich materials and swirling curlicue details on flats, heels and tall boots — and soon, luxe sneakers, available for spring ’16 on Moda Operandi. — J.B.

In just two seasons, Florence-based designer Pamela Costantini has made quick strides with her women’s shoe line by emphasizing Italy’s artisan heritage. “I’ve been fortunate to work with the best factories in Tuscany,” said the 27-year-old, who also designs
footwear for Roberto Cavalli. Costantini’s aesthetic draws from classic menswear looks, and for spring ’16, she’s tapping into the world of 1980s New Wave rock. — J.B.

A New Yorker via Colombia, Gallo’s sleek and sophisticated footwear and accessories are intended for “the city woman who is confident, tasteful and full of life,” said the designer, 28, who started her label in 2013 after studying at FIT. Gallo set out to craft a line that blends classic, modern and casual ingredients, and she’s crossing her fingers that spring ’16 will be her breakout collection. “It’s sharp,” she said, “but in simple shapes that truly make a statement.” — J.B.

For Italian-Brazilian designer Paula Cademartori, 2009 was a turning point. That was the year she left a job at Versace to take part in the Vogue Talents project and began work on her own handbag line, launched the following year. Now sold in roughly 30 countries, Cademartori’s artful made-in-Italy label is offering footwear starting this fall. “Launching my first shoe collection is part of a strategy of diversification and the desire to conquer new markets and clients,” said the Milan-based 31-year-old. — J.B.

Click through the slideshow below for styles from all 20 emerging designers.