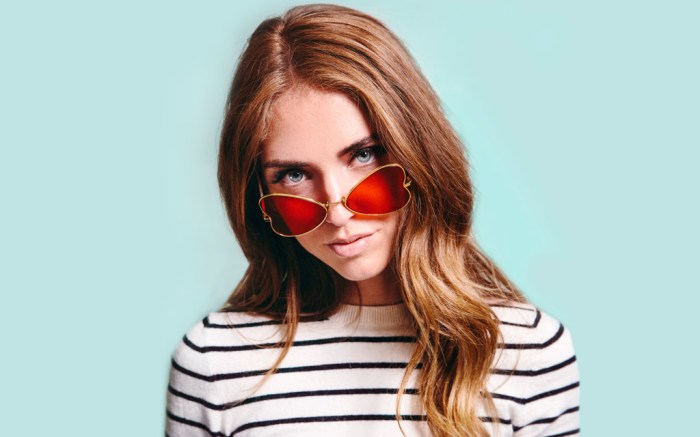 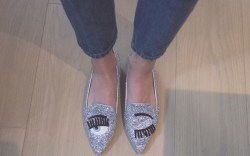 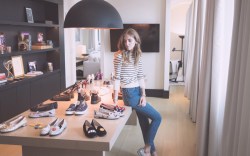 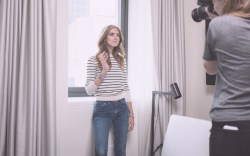 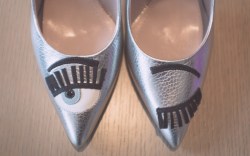 #TheBlondeSaladNeverStops. That’s Chiara Ferragni’s catchphrase on Instagram, where she has more than 4.7 million followers spanning three accounts. The word mashup — a reference to her peripatetic pace — has been hashtagged tens of thousands of times. It’s a fitting mantra for the driven 28-year-old, who today sits at the very apex of the web-lebrity pyramid.

Widely considered the top personal style blogger in the world, the Cremona, Italy–born, Los Angeles–based Ferragni has a rapt audience at her fingertips. The millennial community she has strategically cultivated is eager to click, share and most importantly consume whatever she shows them, be they collaborations with Steve Madden and Superga or paid posts for, say, Ca’ del Bosco, a wine company — all recent side projects. And now she’s setting her sights on the shoe world, where her Chiara Ferragni Collection is expected to pull in more than 10 million euros, or about $11 million at current exchange, in 2016.

While some might be skeptical of her power, one can’t just write Ferragni off as yet another blogger, particularly when Harvard published a 16-page case study on her last year (cue #theblondesaladgoestoharvard photo op).

How did a law student who began posting amateur outfit shots online in 2009 emerge as a fashion force to be reckoned with? Very carefully, it turns out, with highly calculated precision fueled by her huge fan base.

“So many people were interested in what I was doing from the beginning,” said Ferragni one recent afternoon from her suite at New York City’s The Edition hotel. She’s all-angles thin, with a photogenic head of mussed amber waves — a shade that isn’t quite blonde anymore.

Not that it matters these days, with her evolving brand and theblondesalad.com now functioning as an editorial site that attracts luxury advertisers. The bulk of the content is created by her 18-strong team in Milan.

Known for her of-the-moment fashion sense, today Ferragni is wearing a relatively pared-down outfit: a striped Stefanel sweater and vintage tailored jeans by Redone. One’s gaze can’t help but go straight to her shoes — a pair of Chiara Ferragni Collection pointed loafers covered in glitter, featuring her go-to ocular motif on the toe.

“The flirty eye is our signature,” she said of the label, which is a separate entity from The Blonde Salad. “I have a bit of an obsession with eyes and always want to use them.” The first collection debuted for fall 2010, and this detail is now just as recognizable — and, indeed, ’gram-able — as Ferragni herself.

But while her shoes might appear less than serious, Ferragni cares deeply about their made-in-Italy quality as she aggressively works to grow her business. (Her cut is 10 percent of profits.)

“When I started, I didn’t have any idea of production or how things worked in footwear,” she said in her rapid-fire, accented English, with her French bulldog, Matilda, on her lap. “I’ve always been into shoes and bags. Shoes, I’ve always felt like I could do. And there is much more space for new people [today],” she explained. “But bags are such a different, difficult product. I already have so many favorites, and they are the iconic brands.” Indeed, on her feeds, there’s a steady stream of Birkin, Celine, Chanel and the like.

Together with her CEO/co-founder and former boyfriend, Riccardo Pozzoli, Ferragni initially entered a footwear-license agreement before taking ownership with the help of an angel investor and a sales manager in 2013. Next, they hired a three-person design team in Milan. Despite the nine-hour time difference between California and Italy, Ferragni stays in constant contact with the designers and visits the headquarters about every month and a half for a week. She also makes factory pit stops a priority every season.

“My designers are amazing. I’ve always loved their style. It changed the whole concept once I put them in place,” she said. “Now we brainstorm and go through the creative process together. They understand what I love. When they come to me with ideas, it’s rare that it’s something I wouldn’t wear.”

Ferragni’s transparency and candor when it comes to her involvement in her collection is refreshing, particularly in an age when countless bloggers, actors, pop and reality stars claim to have “designed” or “collaborated on” collections when they might have merely been on an e-mail chain — or, in some cases, just blindly doled out their name for a fat sum. There is no entitled appropriation of the word “designer” here. Perhaps because it’s footwear, and Ferragni is from Italy, home to the very best, she knows better than to misrepresent her skill set.

“I’m more the creative director,” she said with no qualms. “I mean, I cannot design shoes. It’s my ideas, and they translate them into the designs. I’ve never done fashion school or anything like that. But I have good instincts.”

It certainly helps that those instincts can be verified in virtual nanoseconds via her followers, who act as a sounding board for the shoes, which she often wears, snaps and posts.

Alessio Sanzogni — GM of The Blonde Salad (or TBS) and the Chiara Ferragni Collection, who formerly headed digital at Louis Vuitton in Italy — attests that the brand relies heavily on social media for direction. “Reading our comments is like having a consulting firm. They are super-picky and don’t think twice about giving feedback,” he said. Ferragni said she reads and applies the input. “I receive such instant comments on what I post. I’m so aware of everything that is happening around me in the fashion scene. So now I get to know immediately if a lot of people will like a shoe.”

And “like” them they do. The collection, which retails from $217 to $400, includes espadrilles, sandals, flats, sneakers, pumps and boots. None of them could be described as basic, nor discreet, with interchangeable Velcro emoticon patches and personal slogans across the toe box like “Never Stop” in block caps.

While the footwear is definitely loud, it’s hard to knock Ferragni — whose own aesthetic can skew a tad flashy — when major retailers such as Level Shoe District, Nastygal.com, Shopbop.com, Harvey Nichols, Brown’s Shoes, Saks and Nordstrom are lining up to stock the label. “When we started, we wanted to be in the best stores. By being very selective with our product, we got there, beside so many other great shoe designers of my dreams,” Ferragni said, beaming. (Still, when asked what shoe designers she admires, it’s the one time she does, well, stop, drawing a blank.)

For stores, the appeal of Ferragni’s line is as much about her as the shoes. For instance, in 2014, Level Shoe District in Dubai got a buzzy boost from Ferragni’s in-store appearance to launch exclusive styles. “The response was phenomenal,” said merchandise and buying manager Alberto Oliveros, who added that 300 pairs were sold within three hours.

“Chiara’s shoe collection is quirky and fun — it speaks to our contemporary clientele, who are very social media savvy.” The partners are launching a new espadrille capsule together this month, and Oliveros sees great potential for the brand. “She should continue to home in on what works for her — from an evolution perspective, she has already grown,” he said. “She’s definitely on the right path.”

Fellow online influencers, twin sisters Caillianne and Samantha Beckerman of Beckerman Blog, admire their friend’s ability to translate her persona into a bankable business. “Her shoe line fits who she is perfectly,” said Samantha Beckerman. “We went to her party at Le Bon Marché Paris last year, and there were hundreds of fans there lined up to see her. She just has that energy.” Caillianne added that with Ferragni’s friendly, hyper-positive demeanor, she is inclusive versus exclusive. “They feel like they know her through her blog and Instagram. And with her shoe line, people feel like they can be a part of her posse. That’s really appealing.”

The footwear piece of the Ferragni pie continues to develop with an expansion focusing on the U.S. market — the brand will be on the floor in Las Vegas this week. “My following is international. I get recognized everywhere,” she said. (The proof is in the paparazzi shots.) “I wear my shoes a lot. I love saying it’s my brand.” Because right now, Ferragni is where it’s @.