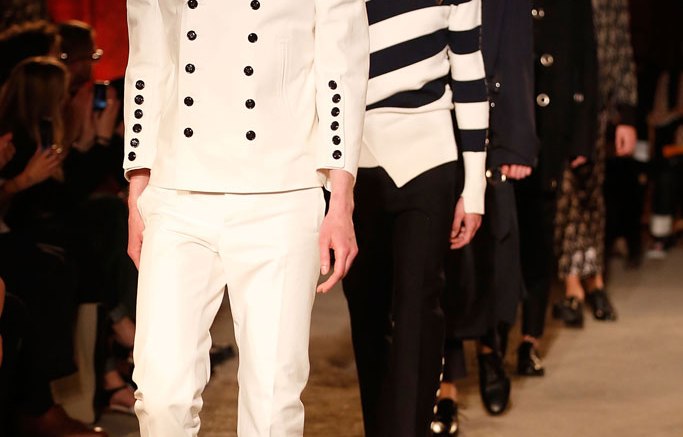 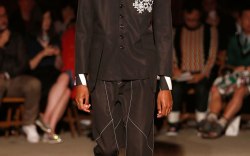 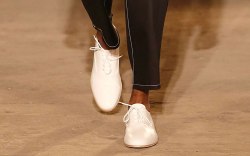 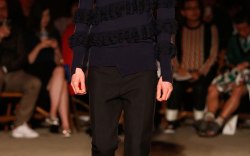 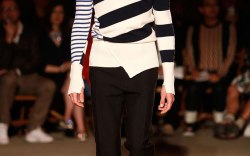 Sarah Burton was feeling restrained for Alexander McQueen’s spring ’16 show in London. Ever since taking over the reigns at McQueen in 2010, Burton has proven to be a quiet — but strong — force behind the label, and the footwear has been equally consistent. This season, Burton took a step back and played with minimal detailing.

For a label known for ultimate extravagance, sometimes shock factor comes in the form of paring down. The new footwear collection was indeed small, focusing on oxfords and sneakers. White leather high-tops were done in an all-over colorway and appeared to have a sort of rubberized finish. The same silhouette was done in a black-and-white combination, with extra-thick flatform soles.

Select white sneakers were also tattooed with nautical images — mermaids and anchors — on the outer sides, which was a loose tie-in with the collection’s sailor inspiration. But the shoes were anything but ship-appropriate.

Lace-up oxfords were the dressier option in the collection. Black-and-white leather styles featured wooden soles and a tailored pointy toe. Despite the brand’s London roots, the styles here went decidedly against traditional English fashion, as the footwear is traditionally on the clunkier side.

For a closer look at Alexander McQueen’s men’s shoes, click through the gallery.